Klay Thompson became the Washington State Cougars' highest draft pick ever when he was taken with the 11th pick in the 2011 NBA Draft on Thursday evening. Thompson didn't have to wait in the green room long to learn his fate, and was scooped up by the Golden State Warriors, becoming a lottery pick in the prospect. The staff at Washington State -- head coach Ken Bone, assistant coach Curtis Allen and the rest -- are understandably proud, and voice their sentiments on Twitter.

And Thompson sent them back a little present from New Jersey. Below is the photo Thompson sent, which should make Washington State fans proud. 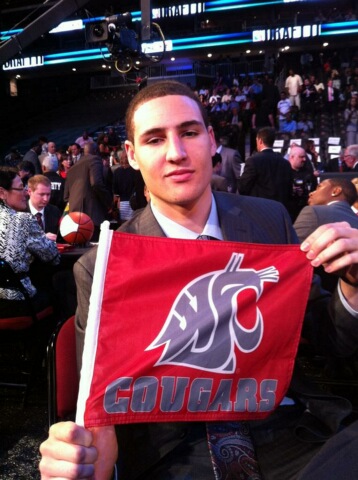 Thompson joins a loaded backcourt, but the Warriors were in love with his skills ahead of the draft and waited on pins and needles while hoping he'd still be around at No. 11. After all the wrangling, which included the San Antonio Spurs making a late push to trade and, perhaps, pick Thompson, Golden State got its man. Thompson will get to play in California and Washington State fans have a new team to root for.

Stay with this StoryStream for the latest on the draft and how Thompson may project in the NBA. For more on the Washington State Cougars, head over to SB Nation's CougCenter.