It's about time Martin Stadium, home of the Washington State football team, gets an update. Athletic director Bill Moos is pushing forward with plans to renovate the stadium, adding luxury suites and a training facility. His plans are grand and the change is part of a huge push to remake the Washington State athletic program from top to bottom. The goal is to increase revenue, as well as entice potential recruits to come to Washington State.

Here is the rendering of the stadium as presented to the Board of Regents (H/T Brett Gleason on Twitter). 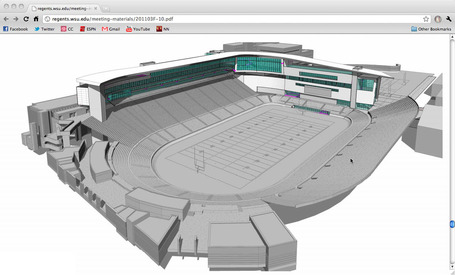 A few things stand out right away. Where the press box used to stand is a new-and-improved press box, as well as luxury suites. In the end zone, where the scoreboard and bleachers were before is a football training facility, meant to house a new weight room, staff offices and much more.

For a stadium that's been compared to high school facilities, this is a major redesign and one that should have Washington State fans excited. Moos is getting aggressive with his push and I'd expect the remodel to happen quickly, with approval expected to come shortly.

For more on the Cougars, head over to SB Nation's CougCenter.