Share All sharing options for: WSU Football Breaks Out Gray Alternates Versus Stanford

Although the Cougars offense isn't looking terribly sharp in the first half against Stanford, WSU is using this Pac-12 divisional game to debut their new alternate uniforms. In a bit of a twist on the current alternate uniforms that are now ubiquitous in college football, these aren't the most...colorful. 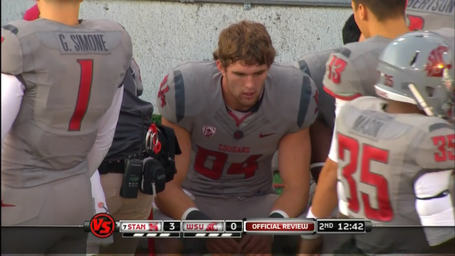 Senior Jared Karstetter seems to have let the monotone, overcast nature of the gray alternate unis get to him just a bit. Early in the game, the senior seemed to have fumbled a ball away to Stanford, only to have the call be reversed and ruled an incomplete pass. Later in the game, however, he really did fumble a ball, for realsies this time, which led to the first Stanford touchdown of the game which put them up 10-0 over the Cougars at the time.

In recent years, we've seen a lot of DayGlo and neon color schemes on alternate NCAA unis, and those have been counterbalanced by the "Nike Pro Combat" alternates which stress black, black, and more black (because black is cool and edgy). It's refreshing to see WSU buck both trends and go for something that really stands out...like solid gray shirts and pants.