What happened on Keenan Allen's 91-yard touchdown? A whole lot of mistakes by the Washington Huskies.

Breakdown would be the operative word for this play. Early in the first quarter of Saturday's matchup between the Washington Huskies and California Golden Bears, Zach Maynard and Keenan Allen hooked up for the longest touchdown pass in Cal history, spanning 90 yards and resulting in a touchdown.

It wasn't so much the coverage that broke down for the Huskies -- though Allen did find a pretty big hole. It was what happened after the catch that made resulted in the lengthy touchdown. Tackles were missed, bad angles were taken and the end result was Allen stumbling into the end zone, leaving the fans at Husky Stadium stunned, wondering if they were watching the same story all over again on the defensive side of the ball.

Cal lines up in 10 personnel -- one running back, four wide receivers. Three receivers are split to the far side of the field, with Allen lined up in the slot on the line of scrimmage, and one to the short side. Washington is lined up in nickel, with two linebackers and four defensive backs. 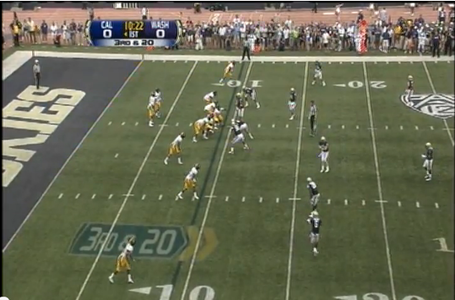 At the snap, the linebacker to the short side of the field feigns a rush before stopping to cover the back, who sneaks out of the backfield as a safety valve. Desmond Trufant is also circled because he's giving away coverage. Just before the snap, he begins to backpedal, which shows he's dropping to cover the deep third of the field -- cover three. 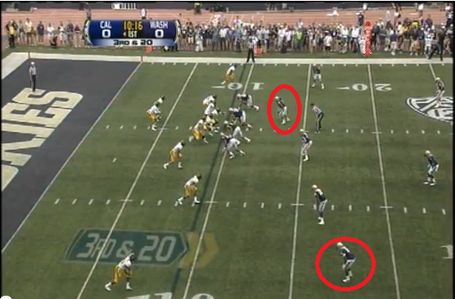 Cal runs the greatest play in football: Four verticals. The outside receivers run streaks, the inner-most slot runs a post and Allen fakes an inside move while running up the seam. The players circled show the coverage and, ultimately, the mistake,

The breakdown begins when Allen makes a subtle, but effective, move during his route. The inside slot receiver is running a post, which should hold the safety covering the middle deep-third. Allen fakes like he's going to do the same, making a move to the inside before straightening up and continuing on his way. 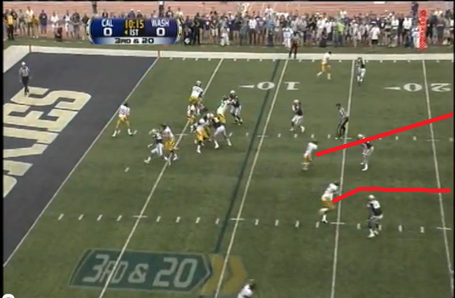 Notice how there are no receivers in this picture. At the top of the screen, though, the Washington corner has executed a superb jam, knocking his man out of bounds and basically killing the route. Also notice how close Washington came to a sack here. 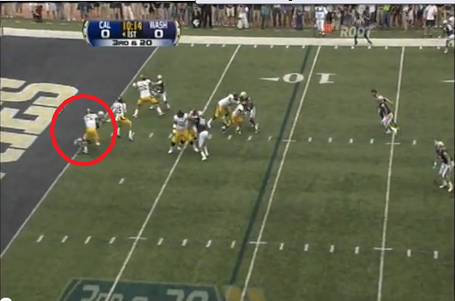 Here you see the problem. Washington rolled three, and Allen broke loose as a result. The safety at the top of the screen is over the top of the route that's been rendered ineffective by a jam. In this shot, two players are covering nothing and Allen is all alone. 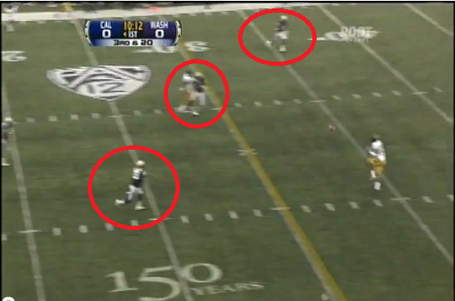 Also curious what Richardson is doing here. I understand going for the strip, but he whiffs completely, missing everything as Allen stumbles into the end zone. 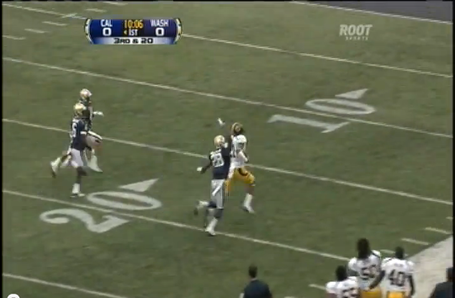 So what went wrong? Four verticals against the Huskies' Cover 3 left the three deep defenders in a predicament. I'm left wondering why Washington didn't roll three to the wide side of the field, dropping Gregory Ducre (I think?) into the deep third instead. This would allow the safeties to roll over the top of the three receivers instead of away from them, as they did on this play.

But coverage aside, there were significant blunders, both in playcall and execution. Richardson was left in no-man's land, the players in deep-third coverage were rendered ineffective and the tackling was enough to make anyone nauseous. It was bad all around.

And, by the way, four verticals nailed the prom queen again. It always does.

Washington Vs. Cal: Reviewing The Key Plays From The Huskies' Win