A look at Chris Polk's 70-yard touchdown pass in the Washington Huskies' win over the California Golden Bears on Saturday.

Throughout the season, college football coaches spend an inordinate amount of time in the film room, studying every single aspect of the week's opponent to find holes, tendencies and to get a feel for what they'll be facing on Saturday. The film room leads to the installation on both sides of the ball, with specific plays implemented to exploit matchups, looks and tendencies. While having supreme athletes helps, it's the work done before the actual game -- and off the field -- that sets up what we see on Saturdays.

There was one play that stood out in the Washington Huskies' win over the Cal Bears on Saturday, and showed the benefits of solid work in the film room. As coaches comb over game film, they'll always find certain looks that can be exploited, creating favorable matchups that, when a play is executed correctly, can lead to a home run. One such play took place in the fourth quarter, and utilized Chris Polk in a different capacity than normal.

Clinging to a one-point lead over the Bears on Saturday afternoon, the Huskies' offense took over early in the fourth quarter with a chance to seize complete control of the game. The Washington offense wasn't exactly moving the ball well, and faced a third and long from its own 30. This was the look the Huskies gave.

Photos come from this highlight video. Polk's touchdown is at the 10:52 mark. 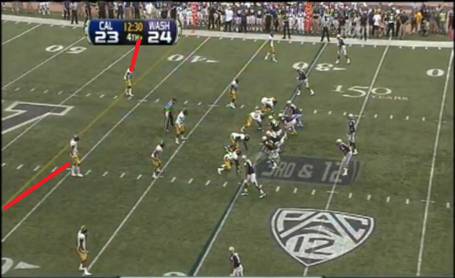 The lines in red are where the Huskies want to draw the safeties to on the play.

Just before the snap, the safeties shifted, lining up straight over the slot men. The hole in the middle of the field is now gigantic, and exactly what the Huskies were looking for. The route combination is shown in red below. 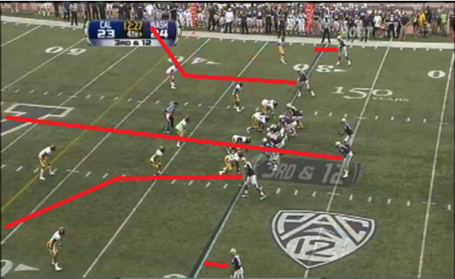 The flankers are decoys here, "running" a hitch. I put running in quotes because they do nothing at the snap, other than taking a quick step forward and turning towards the quarterback. This holds the corners, and the outside receivers serve as outlets.

The slot men run corners to draw the safeties away from the middle of the field, opening up the seam for Polk. If done right, the route combination will leave Polk matched up with a linebacker, which is a massive mismatch. 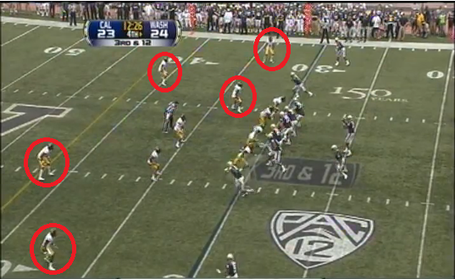 The linebacker opening towards the sideline shows what Cal is doing here. He's going to try and force the slot outside, where the safety will pickup coverage. The same is mirrored on the two receivers to the bottom of the screen. 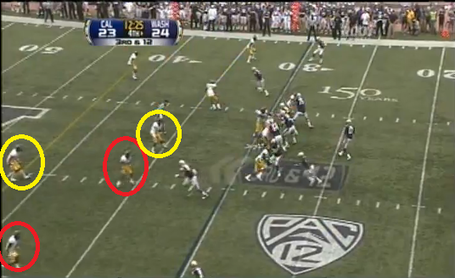 By the time the ball comes out, the play is already over, and Cal is left dead in the water. 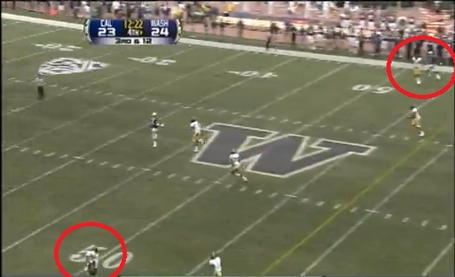 The two safeties are out of the play and Polk has easily outran the middle linebacker, who gives chase by doesn't stand a chance in the least. All Price has to do is deliver a strike and Polk is off to the races.

Polk makes the catch, waltzes into the end zone and gives the Huskies an eight-point lead in the fourth quarter. It was a superb call against the Bears' defensive look, serving its ultimate purpose of creating a mismatch and letting Polk go to work against a linebacker.

It's not often we see Polk streaking down the middle of the field on a pass route, but it worked to perfection in this case. The work done in the film room leading up to the game made this play go. All the offense had to do was execute.

Washington Vs. Cal: Reviewing The Key Plays From The Huskies' Win