We take a closer look at two controversial calls -- both of which were kick-catch interference -- that went against the Washington Huskies on Saturday.

Washington head coach Steve Sarkisian was unhappy with the officiating in the Huskies' loss to the Nebraska Cornhuskers on Saturday, with three kick-catch interference calls standing out as the most glaring mistakes. One call, just before the half, turned a Washington fumble recovery into a 15-yard penalty, and Nebraska added a field goal just before the half to take a 20-17 lead. In the second half, Desmond Trufant was flagged for interference, setting the Huskers up with excellent field position.

I wondered whether the calls were correct and decided to research the rules and review video of the penalty. The screen shots below come from this highlight video, and rule excerpts were taken from the NCAA football rulebook.

Here is the rule in question, which has to do with the unimpeded opportunity to catch a kick, whether a fair catch is signaled or not. The emphasis is mine.

ARTICLE 1. A player of the receiving team within the boundary lines attempting to catch a kick, and so located that he could have caught a free kick or a scrimmage kick that is beyond the neutral zone, must be given an unimpeded opportunity to catch the kick (A.R. 6-3-1-III, A.R. 6-4-1-V and IX).

b. If interference with a potential receiver is the result of a player being blocked by an opponent, it is not a foul.

With this in mind, let's look back at two controversial calls that went against the Huskies on Saturday. The first came in the second quarter, when Washington appeared to recover a muffed punt inside the Nebraska 30-yard-line.

First, we should establish Tim Marlowe, the Nebraska punt returner, did signal for a fair catch. Below, you can see him clearly waiving his arm over his head, making a valid fair catch signal. 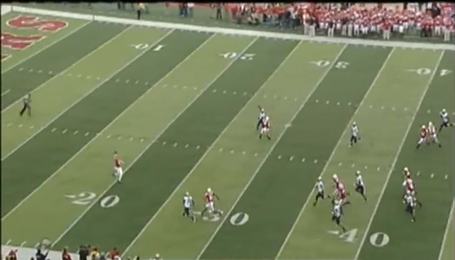 In order for kick catch interference to take place, contact has to be made with the player attempting to field the punt, his progress has to be impeded or a Washington player has to touch the ball. There's no halo rule, so the unimpeded opportunity to catch the punt is a judgment call. First, there was this: 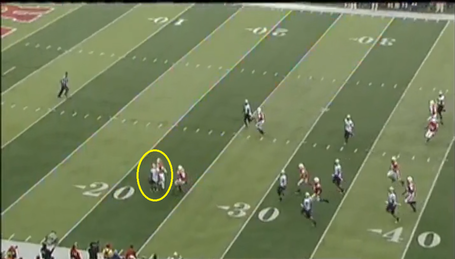 There was no contact at this point. However, there was contact a moment later, but it came from a fellow Nebraska player who was not pushed into the return man.

The flag was thrown on Cort Dennison, shown below near the Marlowe. The streak next to his head is the ball, and it's clear Dennison did not make contact with Marlowe at this point. 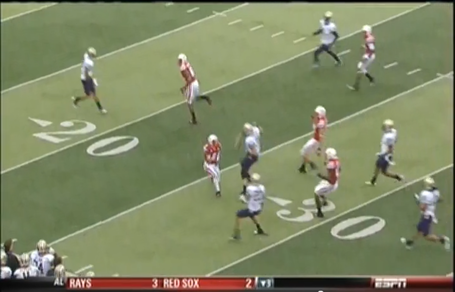 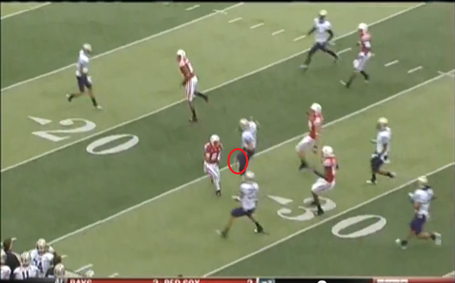 The final frame of the sequence shows Dennison past Marlowe. Contact still hasn't been made. In this shot, the ball is bouncing up and hitting Marlowe, resulting in a muffed punt. 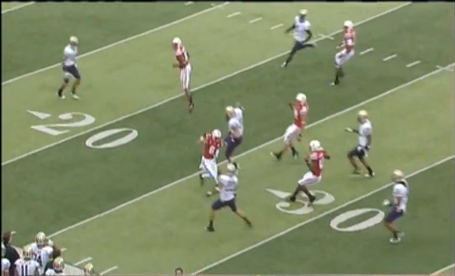 It's worth noting that if Washington had recovered the fumble, it would've been dead at the 26-yard-line because a muffed punt cannot be advanced.

The rules get a little dicey, and leaves room for an official's own judgment. Two examples and rulings, listed in the NCAA rulebook, would seem to be relevant here. The first has to do with the return man having to detour around an opponent to make a catch.

Team A's ball, fourth and 10 at the 50-yard line. Team A's windblown scrimmage kick is on its downward flight at Team B's 30-yard line. B18, starting at the 20-yard line, must detour around A92 at the 25-yard line to make the catch at the 30-yard line. RULING: Foul by A92 for interference with the opportunity to catch a kick. Penalty-15 yards from the spot of the foul, which is the 25-yard line

The other has to do with a player from the kicking team either bumping into the return man or being struck by the ball.

Beyond the neutral zone A1 is standing or running between a kick in flight and B1, and (a) A1 is struck by the ball while B1 is in a position to catch the ball; or (b) B1, in attempting to catch the ball, bumps into A1. RULING: Kick-catch interference. Penalty-(a) and (b): 15 yards at the spot of the foul.

With this in mind, the penalty begins to make some sense. Dennison essentially beat Marlowe to the spot. Above, you can see the ball coming down almost right on top of Dennison, and if it didn't touch him, it came fractions of an inch from making contact. One could argue the return man had to detour around Dennison to make the catch, or could, perhaps, argue Dennison may have been struck by the ball as the Nebraska player attempted to return it, though the latter is inconclusive on video.

While controversial, the penalty actually does make sense after reading through the NCAA rulebook and the example rulings that come with it. Looking back, it doesn't seem as terrible as the announcers made it out to be. In fact, the officials were probably correct.

The other controversial call came early in the third quarter, when Desmond Trufant was flagged for, you guessed it, kick catch interference. In this case, Rex Burkhead, back deep for Nebraska, did not signal for a fair catch. Remember: there is no halo rule in college football and officials are instructed to throw a flag if there's question as to whether the opportunity to catch a kick was impeded.

Here's the moment the ball is fielded. 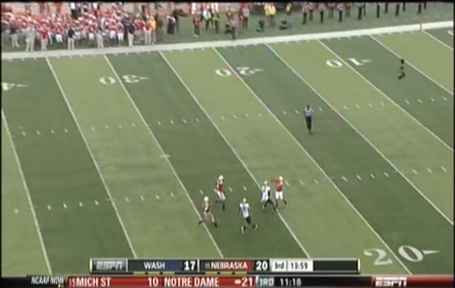 Now watch the play in real-time, and notice how bang-bang the play is.

Remember the bolded section of the rule above? This is where it comes into play. Essentially, Trufant made contact with Burkhead right as the ball got there. And because it was near simultaneous, and the play was in question, officials are instructed to err on the side of a penalty.

While Trufant's timing was perfect, it was almost too perfect, resulting in the flag. Does it feel unfair? Sure, because Trufant didn't actually get there before the ball. But because it was so close, essentially simultaneously, it is, according to the rule book, a penalty.

These two penalties didn't result in the Huskies' loss, either. Perhaps these moments resulted in some kind of shift in momentum, but the Washington defense's tendency to hemorrhage points, as well as a costly muffed kickoff early in the second half, hurt more than a few kick-catch interference flags.