Share All sharing options for: PHOTO: Nebraska May Wear Black Helmets Against Washington

Nebraska may be ready to fight fire with fire on Saturday as the Cornhuskers battle the Washington Huskies. Remember the Holiday Bowl last year, when Washington wore its black jerseys, then handled Nebraska to even the series? Now, for the rubber match, Nebraska may be breaking out a new uniform combination of its own.

Notice the photo below, tweeted by the Nebraska equipment account. Yes, the gloves are pretty cool, but look at the top-left corner of the photo. Notice anything odd about that helmet? 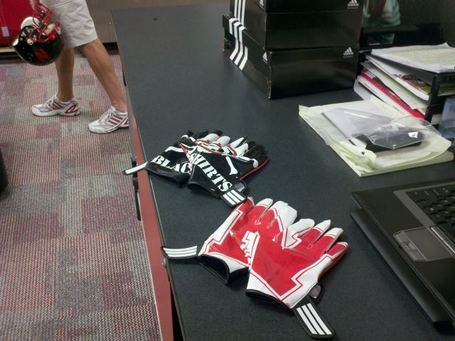 This may have been on accident, or it may be a teaser of what's to come. Or maybe it's just a failed experiment. Whatever it is, the owner of the Twitter account quickly tried to explain it away.

When questioned by followers, who wondered why there was a black helmet, this was the response:

@omahasker some students made it about 7 years ago from an old Texas Tech helmet.

Right, that seems like exactly what happened here. A fake Texas Tech helmet was being carried around in the equipment room for no reason. Nope, no reason at all. It's just moved around randomly.

Or, perhaps, the Blackshirts are about to get black hats. I'm gonna root for the latter. It's always fun to see new uniforms, especially when it's a traditional power.