Share All sharing options for: Pac-10 Tournament 2011 Bracket And Schedule: Opening Round Games An Uphill Battle

The road to the Pac-10 Tournament championship is a rocky one for the bottom four teams in the conference. Instead of a free pass to the quarterfinals of the tournament, given to the top-six finishers in the regular season, Oregon State, Oregon, Stanford and Arizona State have the added hardship of playing an opening round game, set to take place on Wednesday at Staples Center.

While every Pac-10 team has a shot at the conference tournament title, and automatic NCAA Tournament bid, the regular season is not forgotten. The bye, in essence, given to the top-six keeps each team fresh, without the possibility of playing four games in as many days -- a daunting task for any team.

The top-two finishers -- Arizona and UCLA this season -- receive the benefit of facing one of those four play-in teams. The Wednesday night game followed by a Thursday afternoon or evening game leaves little time for recovery, putting those bottom-four teams at a severe disadvantage. Since the Pac-10 Tournament expanded to include all 10 teams in 2006, only two teams ranked among the bottom four have made it to the semifinals -- Oregon in 2006, California in 2008 -- with neither making it to the championship game.

Seeding matters, especially in a year where the top and middle of the pack are so closely bunched together. For Oregon State, Oregon, Stanford and Arizona State, the odds are stacked against a dream run through the tournament, though stranger things have happened in March.

The Pac-10 Tournament gets underway on Wednesday evening with the opening round games. Here's the schedule and bracket for Wednesday's matchups. 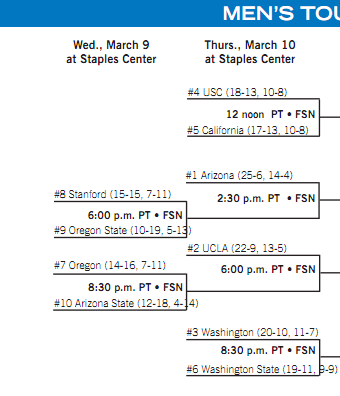 Both matchups will be televised live on FSN. For more on the games, check out the rest of our 2011 Pac-10 Tournament StoryStream. To connect with Washington and WSU fans, check out SB Nation's UW Dawg Poundand CougCenter.