Pac-10 Tournament 2011: Washington 'Punished' Arizona On The Boards Before Thomas Finished Them Off

Share All sharing options for: Pac-10 Tournament 2011: Washington 'Punished' Arizona On The Boards Before Thomas Finished Them Off 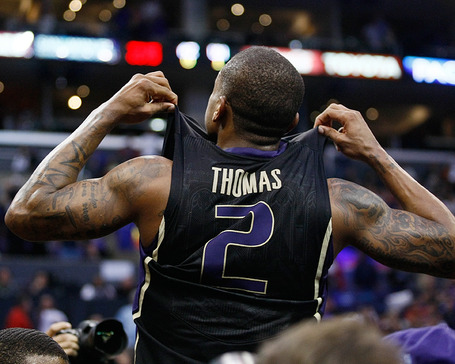 Just as SBN Seattle's own Brian Floyd wrote earlier, Isaiah Thomas put the Washington Huskies on his back and carried them to the Pac-10 title and capped it with an absolutely "cold blooded" buzzer-beating game-winning shot to cap off what may be remembered as among the gutsiest performances in Pac-10 Tournament history.

This was unquestionably Thomas' night and although he plans to get some well-deserved rest on the plane ride back home, that final moment is not something that requires much explanation as Floyd described.

Gus Johnson Adds Cold Blooded To Legendary List Of Calls After Isaiah Thomas Buzzer Beater - The Daily Drip - SB Nation Seattle
No need for hyperbole or a long-winded call, just "Uhhhh ... AHHHHHHHH." It may not be elegant, but it described the moment perfectly using nothing but grunts. And on Saturday, with Gus on the call, we saw another instant classic between Arizona and Washington. And what better ending for Washington fans than Isaiah Thomas hitting a step-back jumper for the win as Gus screams in celebration.

But as hard fought as that game was, a large part of what put the Huskies in position to have a game-winning shot opportunity was their rebounding down the stretch in regulation and throughout overtime. Although they finished the Pac-10 regular season as the best defensive rebounding team by percentage, Mike Schmitz of Arizona Desert Swarm expressed concerns about their interior defense overall prior to the game and Coach Jay Will was none too pleased with it afterward.

THE LAST 3 MINUTES & OT OF THE PAC-10 CHAMPIONSHIP GAME - Arizona Desert Swarm
...during this critical time of game we were being punished on the boards. I don't know if Coach Miller has something personal against Jesse Perry or if he's loyal to Jamelle Horne, because we're being slaughtered on the boards with the ineffective Horne on the floor. Derrick Williams can definitely use some help rebounding, Perry provides that relief.

And indeed, rebounding was a decisive factor and a problem for the Wildcats that got increasingly worse over the course of the game - although the Huskies only held a six percent advantage in the first half, that ballooned to a 15 percent advantage in the second half, and in overtime the Huskies held the Wildcats without an offensive rebound while retrieving two of their three misses.

For the game, the Huskies won the rebounding battle 39 percent to 23 percent, which was undoubtedly their most significant advantage.

However, blaming the post play for the poor rebounding might be unfair - after that TV timeout with 2:56 left in regulation, Washington took one layup, five jumpers, and eight threes. So with that many perimeter shots, it's not that surprising that during that critical period of the game it was the guards who got all three of the Huskies' offensive rebounds.

Less surprising is that it was Isaiah Thomas who got both of his offensive rebounds in that time period, while also hitting a three, setting up those two threes at the end of regulation and hitting the game-winning shot. 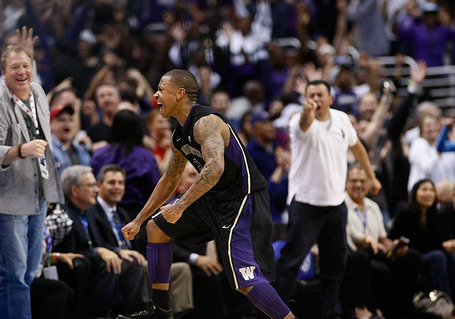