Huskies Play With Dolphins At SeaWorld

Share All sharing options for: Huskies Play With Dolphins At SeaWorld

A handful of members from the Washington Huskies football team made it out to SeaWorld to play with some dolphins Monday afternoon:

I watched as six Huskies --- Jermaine Kearse, Devin Aguilar, Cort Dennison, Kiel Rasp, Will Mahan and Brendan Lopez --- donned wet suits and jumped in the water to spend some time with a few Beluga whales.

Senio Kelemete and Alameda Ta'amu,meanwhile, participated in a situp contest against a walrus. And a few other players (only seniors were invited) rode one of the new roller coasters. (Via: Bob Condotta/Seattle Times)

One of the perks of participating in a bowl game is all the extra fun on the side for the players and coaches leading up to the game. Coach Sark's blog snapped some humorous pictures of the team's time at SeaWorld. Here's one of them featuring Senio Kelemete, Alameda Ta'aamu, and a walrus doing a situp: 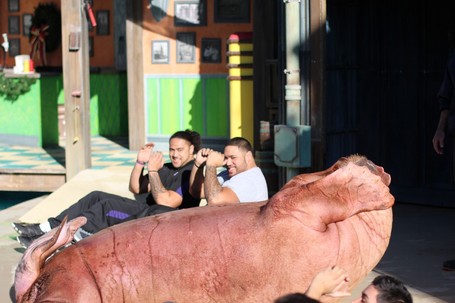