How a simple play design and superb execution allowed Kasen Williams to break open the game as the Washington Huskies faced the Utah Utes.

Share All sharing options for: Kasen Williams And His Jailbreak Screen Touchdown

I love a well-designed, well-executed play in a critical situation, typically in the red zone. On Saturday, the Washington Huskies led the Utah Utes by a field goal early in the third quarter, but had a chance to seize the early momentum in the second half. Facing a second and goal from inside the Utah 10, Washington head coach Steve Sarkisian came up with a great play that utilized Kasen Williams on the outside, along with some superb blocking in front of him.

Williams is the Huskies' other impact freshman, joining Austin Seferian-Jenkins. On Monday, I wrote about why Seferian-Jenkins is so important to the Huskies, and the variety of looks he allows Sarkisian to use. With Williams, it's less about his presence adding more wrinkles to the offense and more about his raw, physical tools.

As a freshman, Williams' body is already developed and ready for the college game. He's big and physical, creating difficult matchups on the outside. And as he's shown thus far, he can be incredibly difficult to bring down when he has the ball in his hands.

Needing a big play to take control of the game, the Huskies turned to Williams on a jailbreak screen. The play itself is one of my favorites, and can be a superb way to attack a defense's aggressiveness when executed right.

The Huskies broke in 11 personnel -- one running back, one tight end and three wide receivers. The tight end was on the line of scrimmage on the left side of the formation, with two receivers split to his side. Kasen Williams was alone to the short side of the field. 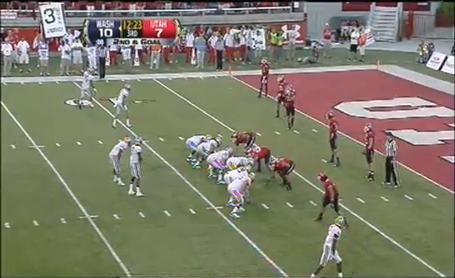 But this isn't the look Washington shows before the snap. Chris Polk motions across Keith Price just before the play begins, leaning upfield as he does. Polk shows like he's going to break for the end zone as soon as the ball is snapped, which gives the appearance that he's heading out into the route.

The routes are in red below, with the blocking scheme in yellow. Polk picks off the corner on top of Williams, the right tackle drops into typical pass protection, and the right guard and center each head down the field to clean up the rest of the players on the short side of the field. 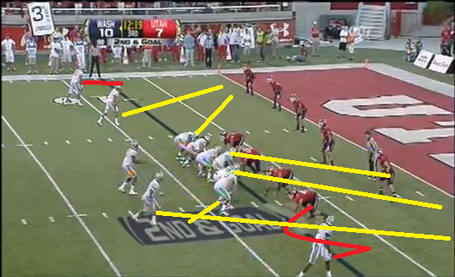 Forgive the mess, but it's kind of apt considering the play design. Jailbreak screens are organized chaos, and if done right that chaos is deadly.

Before the ball gets to Kasen Williams on the outside, one important thing has to happen. It's usually two, but because the corner is giving Williams a significant cushion, Washington doesn't have to worry about rubbing off a pressing defensive back. It was the cushion that made this call a no-brainer.

See how the right tackle is going backwards above? He has to show pass protection before cutting the rushing end. It's vital that the tackle on the play side of the field cuts his man down, because the end will almost always realize what's going on and bat the pass down. Cut the legs out from under the end and the problem is solved. 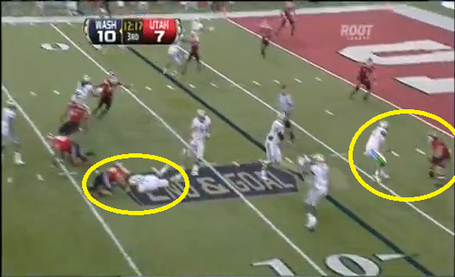 Two sets of players are circled here. On the left, the end has been cut down and neutralized. Mission accomplished. On the right is the block that will eventually make this play go. The right guard is out in front and has his man teed up. The players on the wide side of the field are rendered ineffective due to the Huskies' mirror the play to that side, as well.

Back to that right guard. In this frame, you can see why his block, and the ensuing chain reaction, was so important. The spot circled in the above screen shot is the point of the attack. Below is the result. 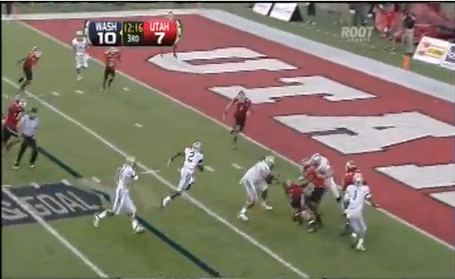 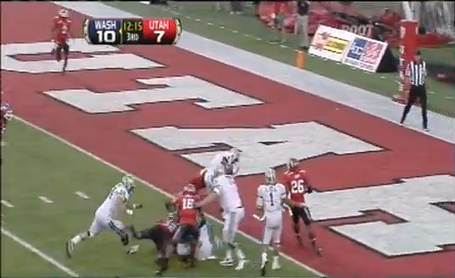 And he easily does, finding the end zone before the defense can converge on him.

Needing a touchdown to put some breathing room between themselves and the Utes, the Huskies turned to Kasen Williams on what amounted to a long hand-off, putting blockers out in front of him on a jailbreak screen. The play design itself was superb, and took advantage of the coverage Utah was showing, as well as a numbers mismatch in the blocking scheme.

All Williams had to do was catch the ball and beat a man to the goalline, which he did easily. Just another example of how Williams can be used in the passing game, and how he can make an immediate impact for the Huskies.

Washington Vs. Utah: Highlights And Play Breakdowns From The Huskies' Win