Austin Seferian-Jenkins And The Diversity Of The Washington Huskies' Offense

How Austin Seferian-Jenkins changes the Washington Huskies' offense, from new formations to a variety of personnel packages.

Share All sharing options for: Austin Seferian-Jenkins And The Diversity Of The Washington Huskies' Offense

I've heard Austin Seferian-Jenkins be called the game-changer for the Washington offense, singled out as a big reason Keith Price has burst onto the scene with a terrific start to the season. Having a safety valve has been cited as a reason for Price's success, and Locker's shortcomings as well. It seems so simple, yet just having Seferian-Jenkins doesn't feel like the sole reason for the Huskies' success on offense.

Seferian-Jenkins is an absolute specimen, a big body with soft hands and athleticism that's off the chart. He's a superb weapon in the passing game, from working over the top of an opponent to finding a hole in the defense. But it's not just Seferian-Jenkins' skill or what he does in the route that changes the Huskies offense.

We know Steve Sarkisian loves to use enough formations to make an opposing coach's head spin, but without the ability to utilize a capable tight end, numerous personnel packages and looks went unused. But now, with Seferian-Jenkins and Michael Hartvigson in the mix, the Huskies are able to open the playbook, employing all kinds of looks to confuse a defense.

So let's play a game. I call this "Where in the world is Sarkisian putting the tight end?" 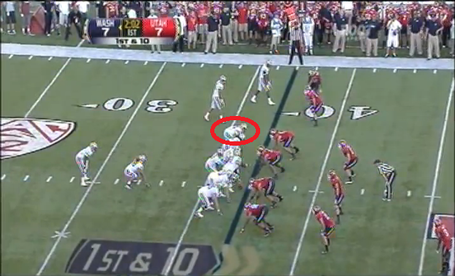 I wanted to show this look and point out what Washington was doing here. The Huskies showed this look multiple times, then shifted out of it to give a somewhat different look. Jermaine Kearse motions hard across the formation, and as he does, he brings Michael Hartvigson with him. The end result completely changes the look of both the formation and the defense, as you can see below. 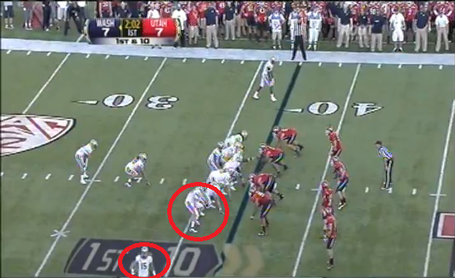 Kasen Williams now has a large cushion. The defense shades to the Huskies' right and Price is able to hit Williams for a nice completion.

Below, Washington is in 11 personnel -- one tight end, one running back and three receivers. Price is in the gun with Chris Polk to his left. This was a common look for Washington, and either Seferian-Jenkins or Hartvigson worked as the wing. 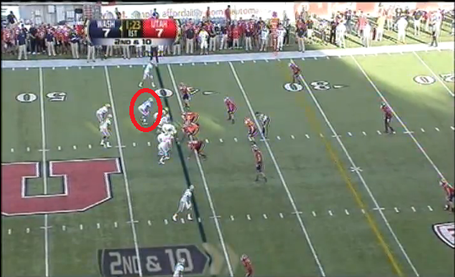 In the next look, Washington breaks in the I, with a tight end lined up to the right of the formation. Two receivers are bunched to the wide side and the man lined up as the fullback in the I motions out to the wing. The wing and tight end seal and Polk runs around the right edge for a nice gain. Notice all the green on the short side of the field. 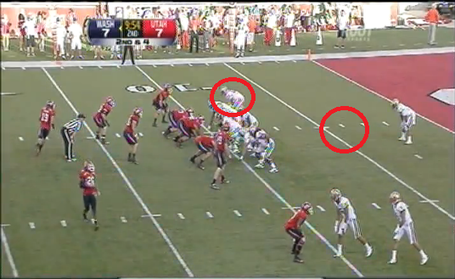 Here the Huskies are in the gun again, and also in 11 personnel. The tight end motions across the formation in a very common type of pre-snap movement. The following screencap is from just before the snap, with the red line showing where Seferian-Jenkins came from.

Seferian Jenkins breaks to the flat, the corner blitzes and Devin Aguilar is left open for a nice game as he sits in the whole vacated by the blitz. 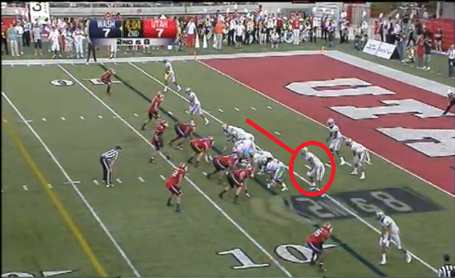 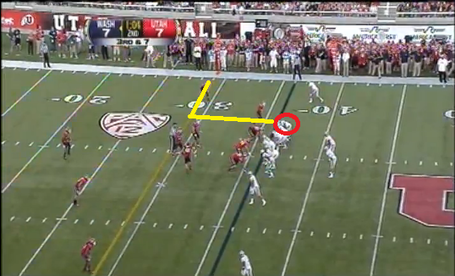 The Huskies faced third and six earlier in the third quarter and broke in 11 formation, with Price working out of the gun. But there's a subtle wrinkle here: Polk is at pistol depth and Seferian-Jenkins is the wing on the wide side of the field, with two receivers outside him. The wide side is overloaded, and Seferian-Jenkins just has to get six yards upfield and get his head around for a first down catch. 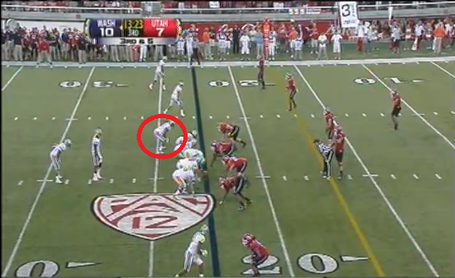 But Seferian-Jenkins isn't just being used like a typical tight end, working inside the formation. The following shot shows what the Huskies can do with him. Here, he's split wide, and because of his skills, Utah has to respect him. 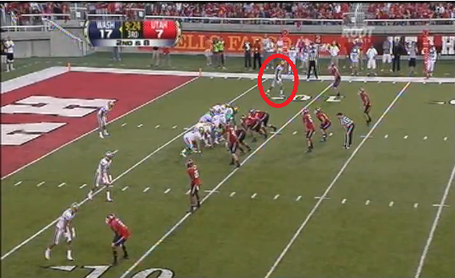 This time, Seferian-Jenkins begins the play split out wide to the far side of the field, then motions into a wing position,  bringing the coverage inside with him. 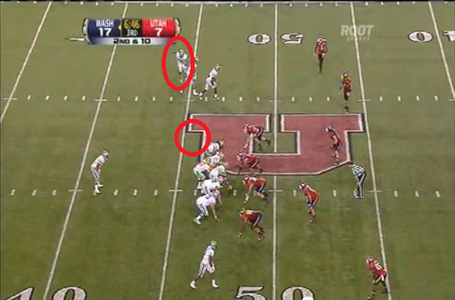 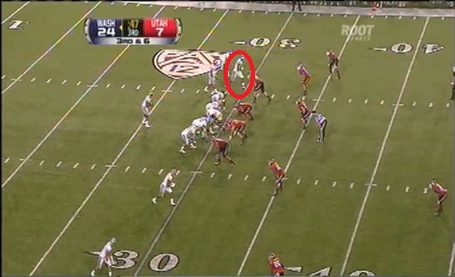 So what happens when an offense shows one look over and over throughout the game? It allows the offensive coordinator to pull a stunt like the following. The tight end is circled in red below, but who is circled in yellow, positioned on the wing? 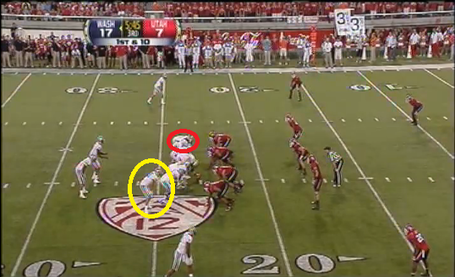 That's not a tight end: it's Jermaine Kearse. And from that wing spot, he wheels down the sideline, catches a pass from Price and scores. Same kind of look with different personnel, and a subtle wrinkle that gave Washington a bit of a mismatch.

Seferian-Jenkins gives Washington more than just what we see on the stat line. Sarkisian's offense -- heavy on West Coast emphasis -- needs a live body at tight end who can at least be a receiving threat, if not more. And with a capable tight end, the Huskies are able to experiment and throw out the whole kitchen sink in terms of formations.

Washington Vs. Utah: Highlights And Play Breakdowns From The Huskies' Win