Washington Vs. Colorado: Chris Polk's Touchdown And The Beauty Of A Double-Move

A look at Chris Polk's touchdown catch, the play that set it up and the art of the double-move.

Share All sharing options for: Washington Vs. Colorado: Chris Polk's Touchdown And The Beauty Of A Double-Move

I'm a sucker for double-moves and plays that build on previous looks, be it within a game or week-to-week. Part of it is the all-or-nothing nature of a double-move -- a coach spends a significant amount of time setting it up and baiting the defense, but gets one shot to hit the home run. The other part is the chess match involved -- offensive coordinators show looks and tendencies on purpose at times in an effort to make the defense think a play is going one way before going the other.

The following play builds on something Washington showed against Utah. In fact, we looked at the play in question -- Kasen Williams' jailbreak screen touchdown -- after the Huskies' win over the Utes. The following play was similar in some ways, with one major difference.

Washington breaks overloaded to the right side of the formation. The initial look had two tight ends -- Austin Seferian-Jenkins on the line and Michael Hartvigson as a wing -- on the right, with Chris Polk lined up to Keith Price's right, as well. Jermaine Kearse was split out alone on the wide side of the field.

Just before the snap, Polk motions behind Price and sets to the quarterback's left. Again, similar to the jailbreak screen against Utah. The routes can be see below. 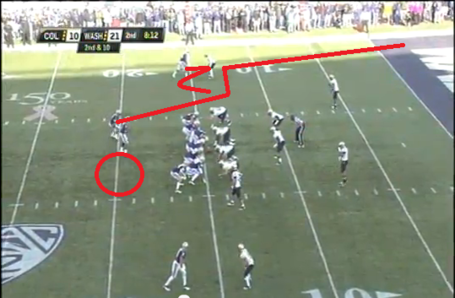 As the ball is snapped, there's a big clue this is going to be something different. Kearse faints upfield and looks like he's going to come back to the ball. Polk clears out into the flat and shows like he's going to pick Kearse's man. The clue comes from the offensive line. Notice none of the lineman release their man to get out in front of the screen. Everyone stays in pass protection. 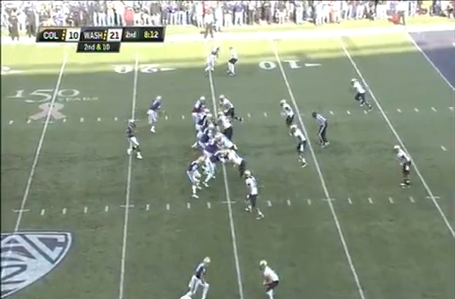 Polk breaks to the line of scrimmage, the cuts towards the sideline like he's going to pick Kearse's man. Again, notice the lineman below: all are in pass protection and Price has a clean pocket. 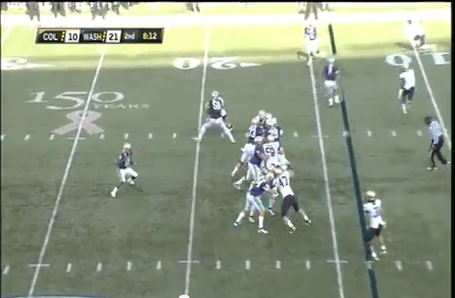 Kearse comes back to the ball, as expected, but Polk does something different. As Kearse shows, Polk plants again, this time getting vertical. Price pumps the route to draw the defense, as well. This is the double-move. 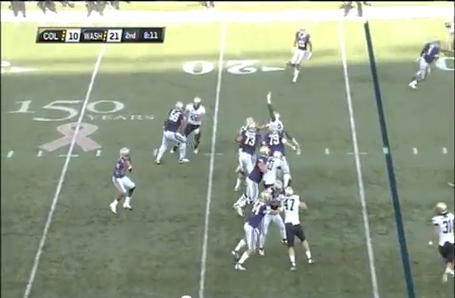 Polk sells the fake and his man bites. The safety, who was stuck in no-man's land on Polk's side of the field, retreats as Polk cuts upfield, but shades more toward the middle instead of the corner. Notice the safety, circled in red, opened up to the inside of the field. He's already dead in the water as the ball comes out. 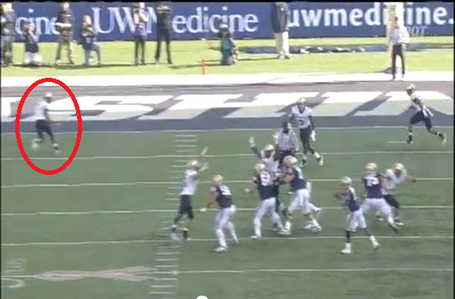 The result is a hole in the defense, and Price throws a strike to the spot. 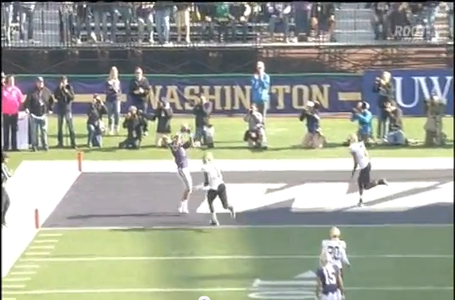 A well-thrown ball capitalizes on the coverage and Polk hauls it in for the score. Polk's man had no help over the top, and the double-move gave him a step and an opening. All Price had to do was throw to the spot, and he nailed it. We should be used to this by now.

So Chris Polk is just a bruiser, a running back that takes contact and fights for yards, right? His pass-catching and route-running just isn't up to snuff. That's the knock on Polk, isn't it?

If there's one thing we've learned about Polk this year, it's that he's more complete than ever before. He can work out of a variety of looks in the Washington offense, and is as valuable in the route as he is with the ball in his hands out of the backfield.

We'll be back with more on Polk and the different looks Washington has used to put him in favorable matchups later. Look for a "Where's Polk" game, just like the one with Seferian-Jenkins. I think you'll find Polk is being used in many more ways this year than he has been in the past.

Add it all up and you have another dimension to a Washington offense that continues to evolve for the better. And when Polk finds space, be it on the ground or in the route, watch out. He's as dangerous a player as there is in the Pac-12.

Washington Vs. Colorado: Keith Price Throws Four Touchdowns In 52-24 Victory Over The Buffaloes