Hec Edmundson Pavilion has yet another new name with the news that the University of Washington board of regents approved Alaska Airlines as the primary sponsor of the arena. Bank of America's 10-year sponsorship ended as the calendar hit 2011, giving Alaska Airlines the prime opportunity to step in and take over the naming rights.

By the time the Huskies hit the floor later that day, the transformation was already complete (via Chris Fetters) 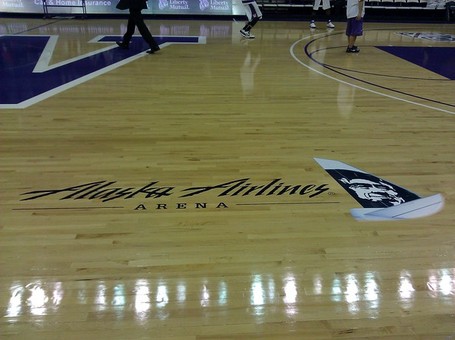 It's a nice logo. It's crisp, has the cool addition of the plane tail and fits well with the color scheme. But there's a problem...

In the interest of full disclosure, I graduated from Washington State University. That said, Hec Ed will always be Hec Ed to me and many others. I grew up in the Seattle area and that's what it was always called, and always will be called in my mind.

I didn't call it Bank of America Arena, or B of A, when they had the sponsorship rights and I won't be calling it Alaska Airlines Arena now. It would be like renaming the Kingdome when it was around. Would anyone call it the Alaska Air Dome?

Fans, both of Washington and rival schools, know the arena as Hec Ed. It is, in my opinion, one of the best in the country -- from the history, the feel of the arena and everything else that goes a game there. And all that is associated with Hec Ed, not an artificial name bought by a corporation.

Hec Ed is a tradition -- and one that's diluted by trying to force a new name on the fans. I understand having to sell the naming rights in the interest of making quick money in a time where athletic departments need it, but there's no amount of sponsorship will change what the arena is truly known as.