"Unfortunately, I can only pick one of these schools. This is hard, I don't know what to choose," Wroten began. Soon after, his teammates revealed Washington shirts and Wroten put on a black University of Washington hat. In typical Husky fashion, a loud cheer erupted and people started barking.

The 6'4 170 pound point guard is the ranked 9th at his position (Scout) and 33rd overall (ESPN) in the class of 2011. Wroten chose Washington over Lousville, Seattle, Villanova and Connecticut in a commitment that is sure to make head coach Lorenzo Romar happy. Wroten stands as the jewel of Washington's 2011 recruiting class.

Wroten is a game-changing prospect with superior court vision and passing, while also possessing the ability to get to the rim and finish with authority. While his stock dropped because of an ACL injury suffered while playing football for Garfield last fall, Wroten has been hard at work to prove the doubters wrong ahead of his senior season.

Wroten is the second top-ranked recruit to commit today. Oakland, California, shooting guard Jabari Brown picked Oregon over Washington and ASU earlier today live on ESPNU. Wroten and Brown had grown close in the recruitment process, even attending a UW football game together, but ultimately went different directions with their commitment.

Wroten had narrowed his list to Washington, UConn, Louisville, Villanova and Seattle after Kentucky head coach John Calipari didn't offer him a scholarship. While he enjoyed his trip to Louisville, even saying UW and Louisville were 50/50 , Wroten's hometown school won out in the end.

Prior to the announcement, Garfield's marching band performed. Here's a shot of the announcement setup at Garfield High School, courtesy of Mason Kelley of the Seattle Times's Twitpic. 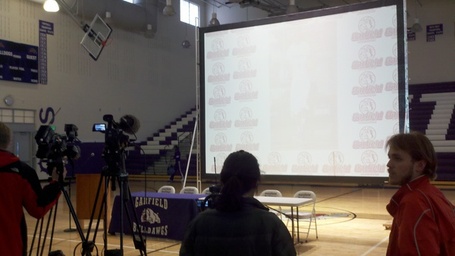 Hats for Lousville, Seattle, Villanova, Connecticut and Washington were placed on a table that featured Garfield's logo. Wroten was flanked by his family, including his father Tony Wroten Sr., and introduced by his high school coach.

Wroten's decision comes on the same day that the Portland Trail Blazers announced that they would hold an intrasquad scrimmage at Garfield next week.  Blazers all star guard Brandon Roy attended Garfield.

For everything Washington Huskies recruiting, head over to SB Nation's UW Dawg Pound.

Angelo Chol Commits To Arizona Over North Carolina And Kansas