Alex Burrows has turned himself into the center of attention in the 2011 Stanley Cup Finals. From his bite in Game 1 to his play in Game 2, Burrows has become the polarizing figure of the series -- Vancouver loves him, Boston abhors him.

"This is my brother Daniel...and Alex Burrows, the vegetarian" -- Henrik Sedin, introducing his line-mates on the NBC broadcast.

In Game 1, Alex Burrows played the role of instigator, drawing national headlines after he was caught on tape chomping down on the finger of Patrice Bergeron. With one bite of a finger, the Stanley Cup Finals had its villain, and the Vancouver Canucks had a rallying point. In the hours following the incident, fans and columnists weighed in, calling for Burrows head or calling it part of the game as the NHL weighed whether to suspend a key piece of the Canucks team for Game 2 because of an embarrassing incident.

A suspension never came, and the NHL only fanned the flames by calling Burrows' bite accidental. Somehow, Bergeron's glove made its way into Burrows' mouth, and the natural human reaction is to take a bite. Or it is if you believe the reasoning of the NHL

It was a move more likely to be found on a playground than on the ice during the NHL playoffs. Burrows' bite was condemned in some circles and laughed at for the sheer ridiculousness of the situation in others. Either way, people were talking about the Stanley Cup Finals -- and not about the game, or Raffi Torres' late heroics that netted Vancouver the Game 1 win.

Burrows fanned the flames with his play, not his mouth, in Game 2. In the first period, it was he who broke the scoreless tie and gave Vancouver a 1-0 lead. And after the Bruins suddenly found an offensive rhythm and netted two goals in just over two minutes during the second period, Burrows played a role in the Canucks game-tying goal in the third, earning an assists for his efforts. By then, Bruins fans upset about Burrows even being on the ice had to have been fuming.

And just 11 seconds into the overtime, Burrows sent the Bruins past the melting point as he broke free, wrapped around the net and gently nudged his shot past Tim Thomas to complete the comeback and give the Canucks a 3-2 win in Game 2. To call him public enemy number one in Boston would be an understatement.

In a sport where teams bond with beards and take an us against the world mentality in the playoffs, Burrows became a rallying point, and his actions became a button to push for the Canucks. It was on full-display in Game 2 as Max Lapierre stuck his finger right into the mouth of Bergeron during the third period of Saturday's game, daring the victim to become to aggressor and leading to one hilarious picture (via Bubba Prog and this post). 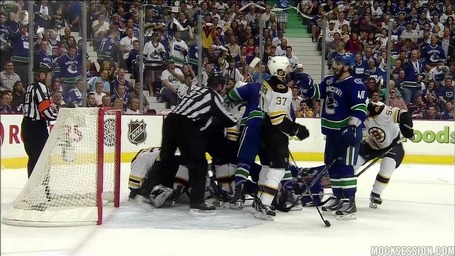 In a series that's been chippy from the start, both teams have ramped up the hits, taken shots that border on cheap and, in the case of the Canucks, taken to taunting to find a mental edge. Burrows is loved in Vancouver and hated in Boston, but has become a central storyline in these Stanley Cup Finals. It'd be one thing if his one moment was his Game 1 chomp, but he came back on Saturday and let his play do the talking, infuriating those who felt he never should've been on the ice.

However you feel about Burrows, there's no denying his body of work this last week. He's stirred up controversy, left his mark -- literally and figuratively -- on both games and turned himself into the polarizing figure of the Stanley Cup Finals. The Canucks have embraced him -- rallying around his antics -- and the Bruins are fuming.