You can find just about anything looking through photos from the Vancouver riots on Wednesday night. Yes, there's pictures of burning cars, a couple kissing and plenty of destruction. There's also videos of stupidity on display in almost every form -- falling down on a burning car, pushing a woman down and the mob mentality. But from the photos of destruction rises this young man, who stands triumphantly above the rest ... on top of a car.

The young man also has a Washington Huskies sweatshirt on, meaning he either traveled north of the border for the game or is a fan in another country (or just bought a sweatshirt because he was cold). Either way, here's your Washington fan in the midst of the riots. 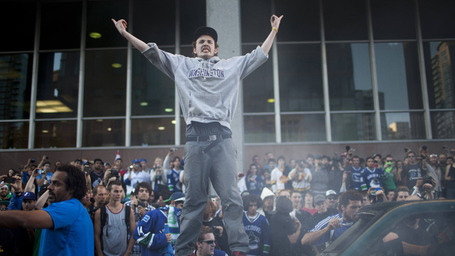 Via the Globe and Mail

See? It wasn't all Canucks-clad rioters. I'm sure if we looked hard enough we could find apparel from Washington State, Western Washington and even Evergreen State College. But alas, this is what we found, and it's certainly an interesting picture. He looks so proud of himself standing on a car that's about to be lit on fire, and he's not even flipping the bird to the camera.

Like we've been saying all along, if you know this young man or recognize anyone in the photos, please contact police. More information on how to do so can be found here.