The Vancouver riots are over and the attention has turned to holding those responsible accountable for their action. Police have turned to social media and the Internet in an effort to identify vandals and track them down in the wake of the destruction in downtown Vancouver. And as with nearly everything these days, social media is playing a role, be it Twitter or Facebook.

For instance, we have this Facebook post that was passed around on Wednesday night and Thursday morning. 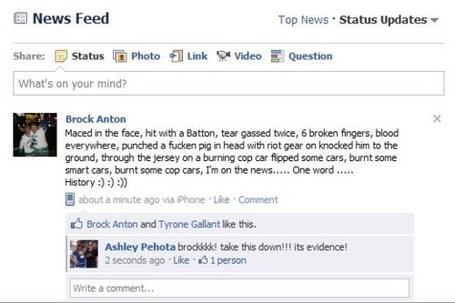 Bragging about being involved in the riot is one of the least smart things to do, and this young man will probably learn that the hard way.

The Vancouver police are on Twitter and were asking the public for help while investigating the riot. During Wednesday evening's disturbance, the police passed information to the public through the Twitter account, including areas to stay away from and updates from the scene. It was truly remarkable to watch.

From real-time information during the riot, including photos, videos and first-hand accounts from the scene at the click of a mouse, to help with the investigation in the aftermath of the riot, social media played a major role in the Vancouver riots. Be it people using social media for good or those using it like the gentleman shown above, there's no denying the role real-time information played during the riot and will continue to play in large events now and in the future.