Vancouver Riots Summed Up Perfectly In A Photo

Share All sharing options for: Vancouver Riots Summed Up Perfectly In A Photo

Late Wednesday night, as the riots in Vancouver were finally beginning to calm down, a young man was interviewed on CTV. The man, who had to be in his teens, was asked what he saw in the Vancouver streets following the Canucks' Stanley Cup Finals loss to the Boston Bruins. We, of course, knew the answer: Mayhem, destruction and a large-scale riot. However, the young man had a different view of the situation, and it jives with the photo below.

His answer? "Fornicating. Lots of fornicating." It seemed like a ridiculous answer, but maybe he wasn't so far off. 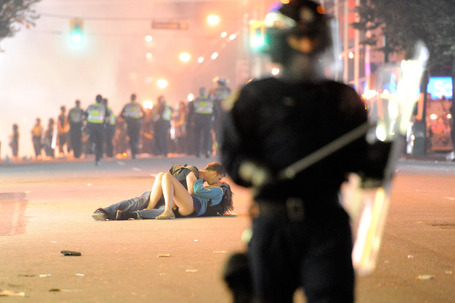 via Chris Mottram at SB Nation

That may just be the best photo of the Vancouver riots. Amidst chaos is love, apparently, and this young couple stopped to take a moment and express themselves. Of all the photos of violence and destruction, this picture may turn out to capture the moment perfectly, at least in some way.