The disturbance in Vancouver took a violent turn following the Canucks' Game 7 loss to the Boston Bruins in the Stanley Cup Finals. Almost immediately after the game ended, small fires broke out as the large crowds -- totaling upwards of 100,000 -- began to destroy property in downtown Vancouver. Police are out in force in an effort to control the situation, but much of the damage, both to property and life, has already been done.

This is what the scene looks like now, courtesy of the ABC7 feed. 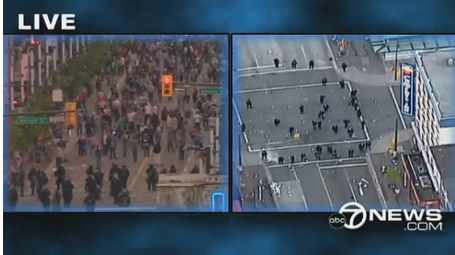 Police have descended on the area to get a handle on the situation and are using tear gas and riot shields to try and disperse the crowd. Much of the crowd was gathered on the corner in front of the CBC studios, where a fire broke out in an intersection.

Below is a screen capture of what appears to be tear gas used on the crowd. 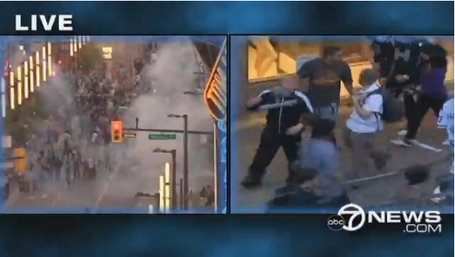 There have been reports of injuries, either from fights or clashes with police. At least one photo is circulating showing what appears to be a severely injured man in a Boston Bruins jersey. You can find that and a curation of photos here.

Sundown hasn't even hit in Vancouver yet and the police face an uphill battle to try to control the crowds following Game 7 of the Stanley Cup Finals. At last report, the police had give the crowds ten minutes to disperse before force would be used to clear the streets. However, with such large crowds, it could be some time before the streets of downtown Vancouver are cleared.

Stay with this StoryStream for the more on the aftermath of Game 7 and the Stanley Cup Finals. For more on the Canucks, head over to Nucks Misconduct. For a deep look at the Bruins, check out the aptly named Stanley Cup of Chowder.