Vancouver Riots After Stanley Cup Finals, Or At Least Burns A Few Cars

Share All sharing options for: Vancouver Riots After Stanley Cup Finals, Or At Least Burns A Few Cars

The city of Vancouver was clearly disappointed after the Canucks fell to the Boston Bruins in Game 7 of the Stanley Cup Finals. The Canucks were the best team in the NHL in the 2010-11 season, and were expected to bring the city its first Stanley Cup ever. And after a Game 5 win put the team on the cusp of the NHL championship, it looked like the drought would finally end 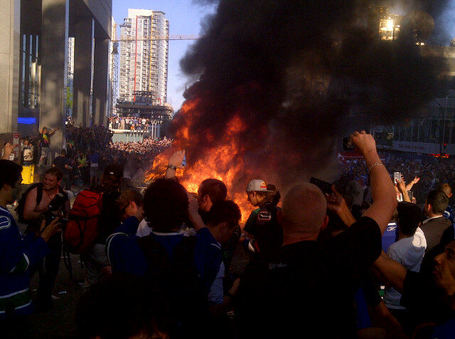 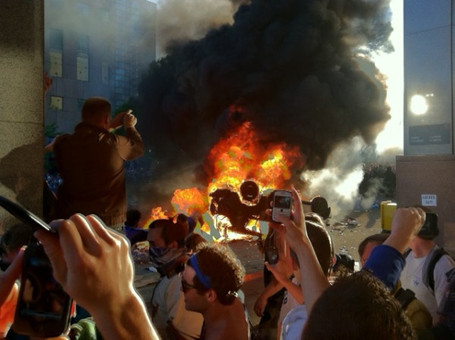 Yes, that's a car upside-down and on fire in the middle of the street.

The police expected some kind of disturbance after Game 7 whether the Canucks won or lost. It's been an all-day party in downtown Vancouver and the city celebrated the day as if it was a holiday. At 11 a.m., lines were already out the door and stretching around the buildings at liquor stores in the city as residents stocked up. The liquor stores closed early in hopes of quelling the alcohol consumption and, hopefully, preventing situations like those shown above.

But as soon as Game 7 ended and the Bruins hoisted the Stanley Cup, police descended on the crowds numbering over 100,000 as damage was done to property in the city. A live feed of downtown Vancouver can be found here, and smoke can be seen rising from the city, be it from burning cars or small fires in the streets.

Unfortunately, darkness has yet to fall and it could get worse in the city. Or the crowds could dissipate as the masses head home to sleep off the Stanley Cup Finals loss. Hopefully it's the latter.