The city of Vancouver has been bracing for this all day, but just minutes after the Canucks dropped Game 7 of the Stanley Cup Finals to the Boston Bruins, 4-0, the rioting began. This morning, lines were already out the door at liquor stores as fans stocked up on alcohol in preparation for the biggest day in Vancouver since the 1994 Stanley Cup Finals. And when you mix booze with a heart-breaking loss, nothing good comes of it.

While it's nothing huge as of now, fires have already broken out. The following photo comes from Danny O'Neil, of the Seattle Times, and shows an overturned car on fire. 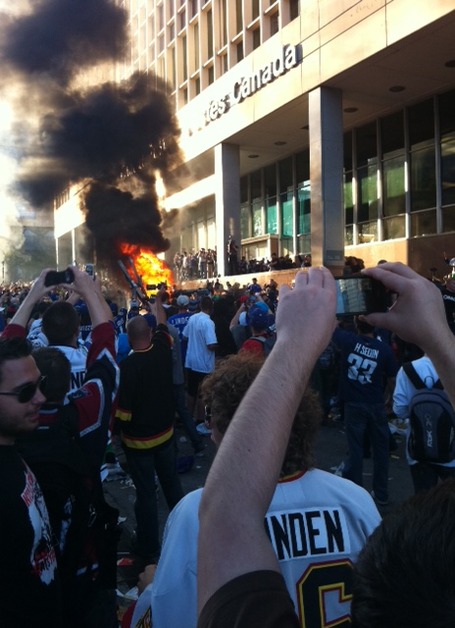 Sadly, it's probably going to be a long night in Vancouver following the Canucks loss at Rogers Arena. Over 100,000 people were reportedly in the streets downtown to watch Game 7 and cheer on the Canucks with a massive crowd. Mixing such a large amount of people with the disappointment of coming so close before falling in the Stanley Cup Finals is never good.

One would hope cooler heads prevail and law enforcement is able to keep control of the situation, but the sheer volume of people in the city makes it a tough task. Sad that such a fun series ends with riots.