Share All sharing options for: PHOTO: Don Cherry's Suit For Game 7 Is ... Interesting?

If you're not watching hockey on CBC, you're missing Don Cherry's amazing suit for Game 7 of the Stanley Cup Finals. If you don't know who Cherry is, think of him as the Canadian equivalent of Craig Sager. His fashion taste is questionable and his suits are more jaw-dropping each time he's on television. Think outlandish colors, wild designs and sparkles.

Here's what he has on for Wednesday night's Game 7. 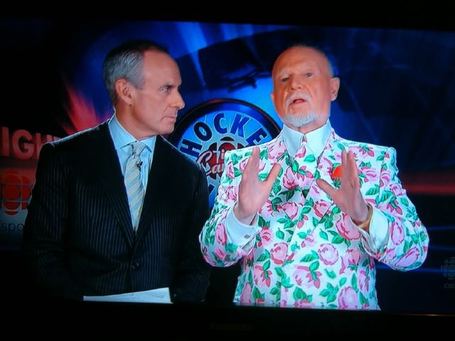 The obvious jokes have already been made, so let's get them out of the way. The suit looks like a tablecloth in your grandmothers house. It's better suited as a picnic blanket. Don Cherry's suit looks like the drapes in a vintage house circa 1960. The suit is also a bad set of wallpaper in a house that must immediately be torn down. One or all of these things combined to spur the creation of whatever that monstrosity he's wearing for Game 7 is.

And I have no idea who designed such a thing.