PHOTO: Shawn Kemp Still Has A Presence At KeyArena As A Seattle Storm Fan

Share All sharing options for: PHOTO: Shawn Kemp Still Has A Presence At KeyArena As A Seattle Storm Fan

A few weeks after bringing the house down with a cameo with local rapper Macklemore at KeyArena for Bumbershoot, Seattle Sonics legend Shawn Kemp returned to the place he "grew up" to take in the Seattle Storm's first round WNBA playoff series against the Phoenix Mercury.

Unfortunately, the Storm's season ended in stunning fashion with The Reign Man present for their 77-75 loss to the Mercury last night (with an unpleasant finish that he could probably empathize with). Although he couldn't help the Storm rebound in the fourth quarter, he didn't leave without making an impact on someone's life. 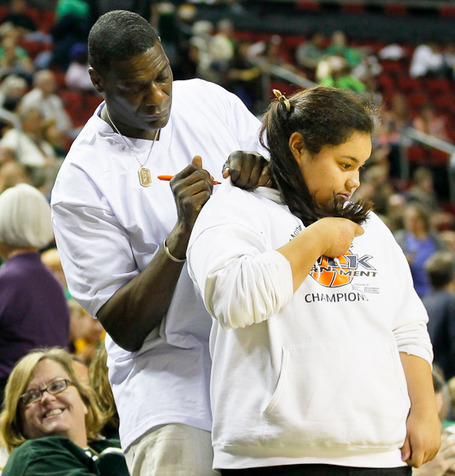 For whatever else other NBA fans think of Kemp, the man is still revered in Seattle and is still making his presence felt.

For more photos of the game, check out the photo gallery by Kailas Images. For more on the game itself, head over to our storystream. For more on the WNBA playoffs in general, visit SB Nation's women's basketball site Swish Appeal.