The Seattle Storm have 14 games remaining on their 2011 WNBA regular season schedule and are currently locked in an extremely competitive Western Conference playoff race. While the games are about to get more exciting in general as teams battle it out for the playoffs, some games are bound to be more exciting to watch than others. So what follows, is one way of determining which games are most worth your time.

The Seattle Storm have not been nearly as dominant in the 2011 WNBA season, but having won five of their last six and currently a half-game ahead of the Phoenix Mercury and San Antonio Silver Stars in second place in the Western Conference the stretch run of their season should be even more dramatic.

And as Kevin Pelton of StormBasketball.com has described, they're starting to hit their stride offensively at just the right time.

Yet even after you learn to appreciate it on its own terms, let's be honest - like any other professional sports league there are matchups that represent the best the game has to offer and those that make you cringe.

I would never recommend that someone's introduction to the NBA last season be a Detroit Pistons - Minnesota Timberwolves game. Nor would I suggest an Oakland A's - Seattle Mariners game as a pleasant introduction to Major League Baseball. And if the NFC West was left out of the NFL last year - or relegated to some sort of B-league - it wouldn't have hurt the entertainment value of our nation's favorite sport much.

As Prada said in his piece, "watchability" is impossible to define objectively. Going back to the NFC West, I watched far too many bad NFC West football games this year because I was a lifelong Niners fans growing up in Seattle because, unfortunately, I have an investment in it as a fan. Some people find a game watchable because there are compelling narratives, such as wanting Miami Heat forward LeBron James to lose or watch him tell everyone else to go back to their miserable lives. Sometimes there's high drama - a playoff bid on the line or a Game 7 situation - that make an otherwise "bad" game engaging.

But for the WNBA, I'm going to define "watchability" in the following terms: Which teams are the best introduction to the WNBA for someone who hasn't watched much of it?

In the interest of figuring that out, I considered three things: 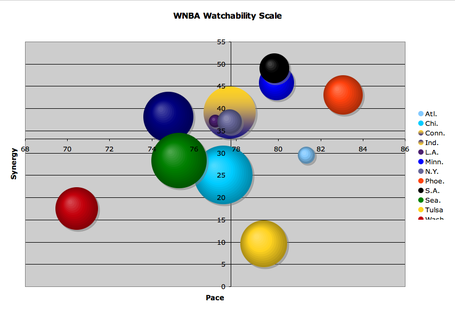 The Storm's defensive prowess and turnovers can make their games occasionally tough to watch, which is why their green bubble is in that bottom left quadrant. The fact that they have the second largest bubble on the chart is indicative of Sue Bird having a MVP-caliber year.

There's more to be said about the entire chart, but for now a look at the top five most watchable remaining games on the Storm's schedule (with additional weight given to those games on TV rather than just online).

This will be the first meeting between the two 2010 WNBA Finalists and the Dream's pace of play makes them one of the more exciting teams to watch, when they're at their best. Although the Dream returned the majority of the team that got swept by the Storm, they have been devastated by injuries this season. So that helps to explain why they're in the bottom half of this chart below average synergy - for all of their athleticism, their games can get tough to watch when they're out of sync.

But adding to the interest of the Dream is All-Star wing Angel McCoughtry who is among the league's most athletic players and among its most dynamic scorers. McCoughtry is currently second in the league in scoring with 20.1 points per game behind the Phoenix Mercury's All-Star guard Diana Taurasi and has a swagger about her that makes watching her fun.

The Dream have even more to play for than the Storm as they are currently on the outside of the playoffs looking in at 8-11. Given that only one team has beaten the Storm in KeyArena since 2009, the game against the Dream in Atlanta will probably be the more interesting to watch.

Unfortunately, this game is only available online, but the Mercury have been by far the most exciting teams to watch since Paul Westhead implemented his uptempo system that is currently being led by head coach Corey Gaines. And somehow or another, games between these two teams almost always end up being exciting. They play fast - as illustrated by being the farthest team right on the chart - and fast is fun.

However, in terms of individual play, this team is not all about Taurasi - in fact, she might not even be the team's best player this season. All-Star forward Penny Taylor is one of the WNBA's most versatile players and has quietly put up MVP numbers this season. All-Star snub Candice Dupree has been solid as well as arguably one of the best power forwards at running the floor and scoring in transition, which is obviously a great fit for their style of play.

What knocks the Mercury down a notch is a somewhat bizarre turnover problem in which passes can occasionally go to nobody in particular or balls can sail out of bounds to someone in the crowd. But if there's one game that you were going to set aside to watch online, this is probably it - with the Phoenix Mercury, San Antonio Silver Stars, and Seattle Storm trying to gain separation from one another, this game will be an opportunity for the Storm to win the regular season series, which could help if things come down to tie breakers.

The L.A. Sparks are currently trailing the Western Conference playoff pack in fifth place with a 7-12 record, but a lot of their struggles stem from the absence of superstar forward Candace Parker who was putting up MVP-caliber numbers before going down.  She should almost certainly be back by this late-August game, which would make this team a lot more interesting to watch and add some drama to the game as they attempt to get back into the playoff race. The last time Parker was present for a game between these two teams, the Storm suffered a 74-50 loss at Staples Center, which still stands as the Storm's lowest output of the season.

If the Sparks get back to playing the way they were with Parker - they were 4-2 with her - they have as good a chance as any team in the league to leave KeyArena with a win. And with the final game between the two being at Staples Center, this game could be pivotal if the Sparks are able to make a late-season run for the playoffs.

With a win at KeyArena on Tuesday, August 23, the Storm could already have this season series in hand by the time this game comes around - the Silver Stars have lost by a combined 32 points at KeyArena in two sub-par games this season. Nevertheless, as tight as this Western Conference playoff race could shape up to be, this game could have playoff implications for both teams regardless of their season series.

The Silver Stars are the highest synergy team in the league this season, share the ball extremely well, and are one of the deepest and most balanced teams in the league. And, like most teams, they are better at home than on the road.

They beat the Storm in the last minute of their last meeting in San Antonio and even without All-Star rookie Danielle Adams, they have the chemistry and talent to repeat the effort. Silver Stars guard Becky Hammon is always exciting to watch and has been one of the best ball handlers in the league this season in addition to being eighth in the league in scoring with 16.7 points per game. As well as San Antonio plays together as a team, they're always fun to watch as the team that probably best embodies high-chemistry basketball.

Regardless of the outcome of the Silver Stars game, this game will likely still have playoff significance against the league's fastest paced team. Playoff seeding or the season series could be on the line here and, as mentioned previously, these games are almost always exciting in some way or another.

It's a game that will feature star power, high stakes, and the usual KeyArena intensity. Independent of circumstances, it will definitely be one to watch.