Share All sharing options for: Minnesota-Seattle Preview: Lynx Offense Will Pose A Challenge To Storm Defense

For all their balance and offensive potency, the Seattle Storm have always been a team focused on defense first and foremost and tonight against the Minnesota Lynx they might get a bigger test than they got in their opener against the Phoenix Mercury.

As described by both coach Brian Agler and newcomer Katie Smith mentioned after last game in today’s SBN Seattle feature, they have some work to do in terms of improving communication and cutting down on breakdowns in their defensive rotations before rounding into championship form.

The Lynx will certainly test the limits of their defensive rotations.

The Lynx kicked off their season with two games against Candace Parker and the Los Angeles Sparks last weekend, with an 82-74 loss last Friday before an 86-79 win on Sunday. The Lynx built some momentum with a 75-65 win over the Tulsa Shock at home on Tuesday that was more lopsided than the final score suggests, but the Sparks’ home-and-home was more telling about what this team is about.

Among the things that’s been most impressive is the Lynx’s ball movement, which starts with point guard Lindsay Whalen pushing the ball and wasting no time to either drive to the basket or find the open player to create scoring opportunities. With her able to use her strength to create a scoring opportunity at the rim, draw defenders to create gaps for others, or draw contact to get herself to the free throw line, she’s the type of player that ca really hurt the opposing team.

In two games against the Sparks, she put up 12 assists and 5 turnovers in addition to shooting an efficient 8-for-16 from the field. When Whalen is playing like that, it open up all kinds of opportunities for both Seimone Augustus and rookie Maya Moore. 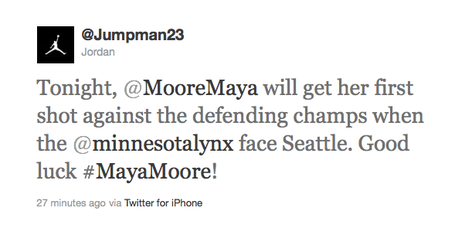 In their two games against the Los Angeles Sparks last weekend, Moore was among the team’s most consistent players averaging 18.5 points in her first two WNBA games while also coming in as among the team’s most efficient scorers in each. However, perhaps the difference between winning the second game after losing the first was that other players got involved – Augustus started making shots (team-high 17 points in the Lynx’s second game against the Sparks), rookie Amber Harris got even more involved as a rebounder and scorer, and forward Rebekkah Brunson continued to attack the offensive boards (5 offensive rebounds in each game) with reckless abandon.

In other words, with Whalen leading a break with Augustus and Moore flanking her and Brunson a force on the offensive boards, defensive focus – both communication and rotations – is of the utmost importance.

The Lynx played the Storm well last year are even more talented and cohesive this season, which makes them more of a threat than the out-of-sync Phoenix Mercury team that the Storm overcame last week.

To follow along with the game, visit SBN’s Swish Appeal for a game thread with other WNBA fans.