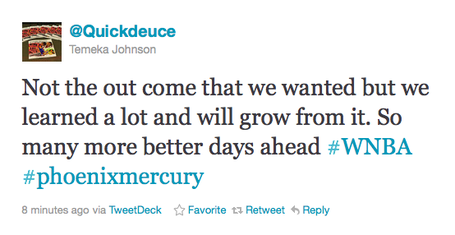 The Phoenix Mercury have made some changes to their offense this season, notably focusing a bit more on their interior game.

Whether that will be effective for the year is tough to tell in a first game of the season with both teams noticeably off their game. What we can say is that it didn't necessarily work well against the Seattle Storm this afternoon in KeyArena.

"We had some problems on offense as far as spacing, setting screens, waiting for screens," said Mercury forward Candice Dupree, who had 12 points and nine rebounds in the Mercury's 78-71 loss. "It's nothing that can't be fixed early in the season. If I had to lose, I'd rather lose now than later on. It's early and we have a few new players so we're adjusting. We'll get it."

But some part of their struggles offensively also has to be attributed to the Storm's defense - the Storm held the Mercury to 21.1 percent shooting in the third quarter while also winning the battle on the offensive boards 7 to 5 (which is admirable given the Mercury's 15 missed shots).

Seth Pollack of SBN Arizona also took note of the role of the Storm's defense in the Mercury's offensive struggles.

Spacing and ball movement with this new Mercury offense is clearly a work in progress and against the Storm defense was a difficult first test.

Defensively, Braxton and Dupree held Jackson in check (15 points) but Temeka Johnson struggled against Sue Bird and the addition of Katie Smith as a second ball handler on the floor gave Seattle more options than last year's championship team. The Storm still only shot 43.3 percent which is normally going to be enough defense to get the win if the Mercury offense can return to it's normal form.

But again, it's a first team and when you consider where these two teams - the past two WNBA champions - have been, neither one of them will have any problem putting things in perspective.

"We did some good things," said Mercury guard Diana Taurasi, who finished with 31 points on 11-for-20 shooting. "There are a lot of things we still need to work on, which is good because you don't want to peak too early in the season. We're going to go back to Phoenix and work on some things that hopefully will put us in a better position throughout the game."