Share All sharing options for: Seattle Storm Got A Gift From The Clock On Tanisha Wright's Key Basket

After Seattle Storm guard Tanisha Wright scored a driving layup with under 40 seconds left last night against the Tulsa Shock, the officials had a long discussion trying to figure out whether the shot beat the clock.

Jessica Lantz, who covers the Tulsa Shock for SB Nation's Swish Appeal, was a little bit confused by their decision.

Tulsa Shock Drops Heartbreaker to Seattle Storm, 82-77 In a Game of Coulda, Woulda, Shoulda - Swish Appeal
But wait. Did the shot really count? The refs said yes. My math says no. Four seconds ran off the game clock when three seconds were on the shot clock, creating a sum of negative one second. Unless you're in a nifty parallel time traveling universe similar to the Island on Lost, there is no such thing as negative one second.

"Well, they said that there was no way that they could tell from the angle of whatever the camera was," Richardson remarked on the call that was under lengthy debate at the scorer's table. "They couldn't tell so you go with the official judgement. And that's - three seconds is a long time for dribble, dribble and then go into the basket and score. There's nothing you can do about it other than you've got to take your pill and swallow it, I suppose."

Lantz correctly notes that when the game clock stopped, it read 38.3 after the play started at 42.5. But the key question is about whether the ball left Wright's hand before the end of the play. 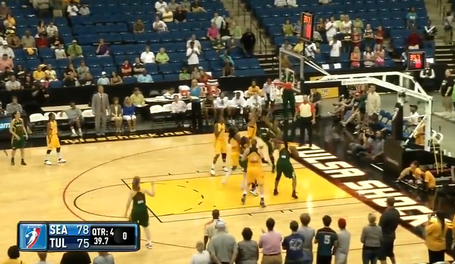 However, going back further in this shot clock sequence, it shouldn't have even gotten to 39.7 seconds - the play began at 1:05, meaning the 24 second clock obviously should have ended at 41 seconds. Somewhere in there, the Storm got approximately an additional 1.3 seconds. It appears that the shot clock started late at the beginning of the play and that .5 seconds ran off the clock 43 seconds left after the officials signaled the timeout to bring the clock down to 42.5.

Of course, as much of a back breaker as it was for the Shock - who were looking for their second consecutive home win - there was still a lot of time left for another Storm possession so it's not as if this one possession cost them the game.

But the bigger question, given the way the play unfolded, is why 6-foot-8 center Liz Cambage wasn't in the game - Wright received little resistance in her drive to the basket and a shot blocker like Cambage would almost certainly have helped in that scenario.