This screencap was taken the instant before Real Salt Lake's Alvaro Saborio collapsed in a heap clutching his face, a truly horrific foul by Jhon Kennedy Hurtado leading to his agony and earning the Seattle Sounders defender a sending off. You can see the malice in his eyes. Or at least you probably could, were he not looking at the ball, which he was in fact in control of at the time.

For shame, El Presidente. For. Shame. 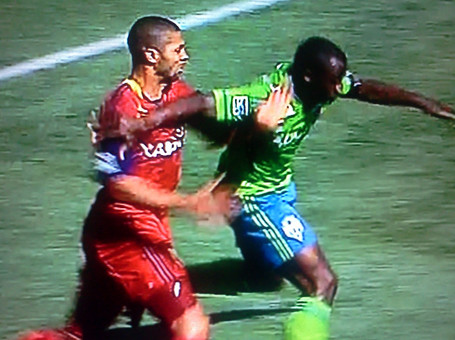 H/T to @unicornmaggot for the screencap; if you're brave enough to witness the shock and horror at full speed, there's video after the jump, but it's not for the faint of heart.

Well done once again, referees of the United States Soccer Federation. It's good to know you're keeping an eye out for thuggery and dangerous play and punishing accordingly.

Unless, you know, it's Mike Fucito actually getting elbowed. In the actual face. And bleeding actual blood.