Qwest CenturyLink Field has a new, albeit temporary, look in preparation for Manchester United's arrival for a friendly with the Seattle Sounders. Though it's been done before, the FieldTurf surface at the stadium was covered with sod this week, allowing the Sounders and Manchester United to play on a natural surface. And while fans are still clamoring for grass to become a permanent fixture at the newly renamed CenturyLink Field, the prospects of such a change seem unlikely, even after a study was commissioned to determine its viability.

Here's what the pitch at CenturyLink looks like after the grass installation. 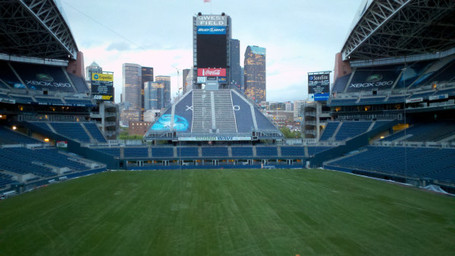 Of course, a temporary install does come with problems, as we've seen before. The surface, while nice, isn't meant for long-lasting durability and tends to fall apart due to the wear-and-tear of 90 minutes of soccer. Still, soccer fans in Seattle will be able to see two matches on grass this summer before the artificial surface makes its triumphant return.