How do you know the Seattle Sounders and their biggest supporters' group, ECS, have made it? The two made an appearance on Jeopardy this week as a clue. The answer: "Emerald City Supporters are the home fans for the Sounders, this city's Major League Soccer team." The question, of course, was "What is Seattle?"

Here's a screencap of the clue, courtesy of Aaron Campeau, who found it on Tom Pollock's Twitter. 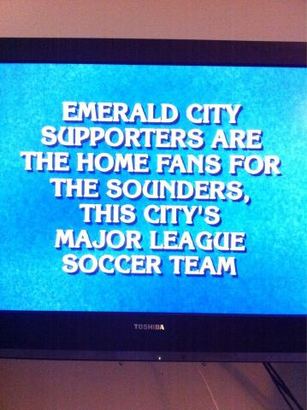 Jeopardy could've chosen anything to describe the city of Seattle, but chose ECS and the Sounders. Pretty sweet, if you ask me. It just goes to show the growth of soccer, the Sounders and ECS here in the Northwest. Good work, boys.

Edit: Jeremiah Oshan notes the category may have been "Know Your Home Team" and that SB Nation's Camden Chat also made an appearance on Jeopardy in the same episode.

Edit again: Here is the video, courtesy of chamberiECS.

For all you Sounders needs, head over to SB Nation's Sounder at Heart. ECS can be found at WeAreECS.com.