Seattle Sounders-Portland Timbers: The Wall Street Journal Shines A Spotlight On The Absurd

Share All sharing options for: Seattle Sounders-Portland Timbers: The Wall Street Journal Shines A Spotlight On The Absurd

Much of the hoopla surrounding the first MLS meeting between the Seattle Sounders and Portland Timbers has focused on the contentious nature of the rivalry, and for good reason; these are two clubs and groups of supporters that do not care for each other in the least, the bitter rivalry dating back to the mid-1970s and the days of NASL. This article from the Wall Street Journal takes a similar tact, and the picture painted of some of the more vocal fans on either side is a fairly ridiculous one. It might not necessarily reflect reality, but it's a bit closer than some of us might be comfortable with.

Let's take a look at some of the more entertaining bits, shall we?

Now, this is just patently absurd. I will admit that we're spoiled for choice here in the great State of Washington; most people would kill for even a small sampling of the craft beer produced here to be readily available, and we've certainly nothing to be ashamed of. But if I'm being honest? We're nothing compared to Oregon. Mac & Jack's African Amber is a very fine beer, one that I personally am thrilled to find at the vast majority of local watering holes. As sure-thing beers go, it's a delight. But Mac & Jack's better than Deschutes? Well, that's just delusional.

"They're hippies," said Seattle fan Nic Greer, a 32-year-old garbage man with a lip ring who wears a chicken mask on his head to every game and a jersey that reads "Chicken Man" across the back.

"They are very envious of us—they have a little-sister complex," said Sean Geiger, a 26-year-old army reserve from Olympia, Wash.

As a native of Olympia, Washington, hearing someone from Olympia, Washington refer to Portland's envy and little-sister complex is just way, way too much for my brain to handle. Congratulations, Sean Geiger; you've gone and destroyed my ability to discern between earnestness and irony.

"In Seattle they have Republicans," said Heather Mathews, a graduate student at Lewis and Clark, who imagines Seattle fans spend most of their free time "sailing around in the their sailboats."

There's no sense in addressing the political aspect of the above comment, but I will admit that Matthews has her estimation of the typical Sounders fan as jet-setting, yacht-piloting millionaire 100% right. As an illustration of the luxury in which we all live, here is the view from my living room window: 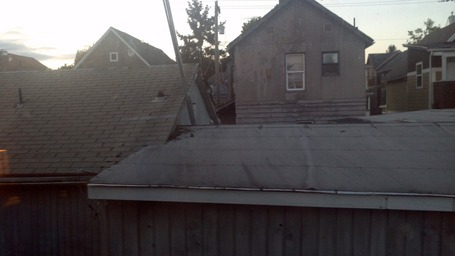 Not everyone was amused by Matthews' comments however, and Sounder At Heart/SB Nation Soccer's Jeremiah Oshan wasted no time in expressing his outrage:

Pardon me, but we do not have SAILboats. Yachts, sure...less than a minute ago via TweetDeck

"They're sellouts, man. They're like, 'Maybe I'll just wear this scarf and drink a lot of beer and go to this stupid soccer game," said Timbers fan Maggie McCombs.

Now, I think McCombs' is being just a tad unfair in her characterization of Sounders fans, but let's assume she's right; how does that make one a sellout? Being a sellout implies having once had some credibility and/or investment in some sort of independent, DIY community, right? I mean, let's be honest; the USL is a smaller league than MLS, but it's not like it was founded by Ian MacKaye or something. And really, if the Sounders are sellouts, would't the same apply to the Timbers? I mean they're the ones that just traded in Toyota for an entire airline.

Like most regional rivalries, each side wishes to paint the other as something different and far more sinister than their own, when in actuality we're all pretty much exactly the same in nearly every way. The only reason I left Olympia for Seattle is because I was able to find a job at the time; it's home now and I love it dearly, but it might not have been, and I have plenty of childhood friends that went the other way. There are differences between the two cities of course; Portland's central-city transit is a little better but Seattle has higher density. Oregon might have the better beer, but they can't touch our coffee (and no, I'm not talking about Starbucks.) Our gourmet food scene is fantastic, but they've got blocks upon blocks of delicious street food. We've got lakes; they've got rivers. And so on, and so forth.

But we're far more alike than we are different, and no matter how venomous the insults might get at times, in reality all that separates us are the pieces of laundry work by 22 guys kicking a ball around on a big green field. Let's hope everyone remembers that come Saturday.

Seattle Sounders, Portland Timbers Play To A Draw On Saturday, 1-1