With season tickets to the Seattle Sounders comes a fun extra every year. The Sounders, since joining the MLS, have sent scarves out with the tickets, shipping them to anxious customers everywhere. The scarves are a badge of honor, in a way, and proudly bear the year and "season ticket member" prominently within the design. Typically, they're the same as your basic scarf, colored in rave green and blue with the team name and logo somewhere on them.

This year, though, the scarves took on a bit of a different look (click to enlarge) 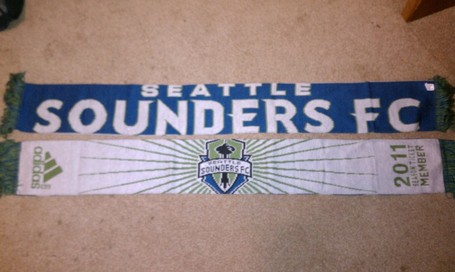 Quite the different look this year, isn't it. Gone is the base rave green color, replaced by a large smattering of white. The logo is still there, and prominently featured, with a rising sun effect as a backdrop. And, of course, Adidas is featured on the scarf as well.

As Sounder At Heart's Dave Clark notes, in a year where the team's uniforms will be shale and rave green, the scarves incorporate blue and white. It's an odd combination considering the scarves typically work in tandem with the product on the field.

What do you think about the scarves? Not enough of the rave green the Sounders are known for? Too much white, a color the team only displays on warmups? Or are they a neat change from the norm for 2011?

For more Sounders news and analysis, check out SB Nation's Sounder At Heart.