Share All sharing options for: The Marshawn Lynch Corn Maze

Marshawn Lynch, by rumbling 67 yards for a touchdown in the wildcard round of the 2010 NFL Playoffs against the Saints, solidified his legacy with the Seahawks franchise long before he signed his new 4-year, $31 million contract this past offseason. Lynch is the de facto face of the Seahawks franchise, and though his troubles with the law recently overshadow this fact, he is very involved in charity, both in his native Oakland and up here in the northwest. One prime example would be a fundraiser through the Marshawn Lynch shaped corn maze now constructed at Rutledge Farms in Olympia.

"Every year, it's a big decision, but we really enjoyed his Beast Mode and the fans were so behind that." Camille Hemenway, of Rutledge told MyNorthwest.com. "This one is going to take a little bit of time to get through. It's combined two mazes and it should take you a good hour and a half, two hours to get through."

The maze, which was planted in March, will be open to the public starting August 10th and the man, the myth, the legend, Marshawn Lynch himself will visit Sept. 1 to help raise money for his charity, Fam 1st Foundation and sign autographs. The Fam 1st Foundation is aimed at empowering and uplifting kids the in Bay Area.

Without further ado - here's a pic of the Marshawn Corn Maze, via Rutledge Farms: 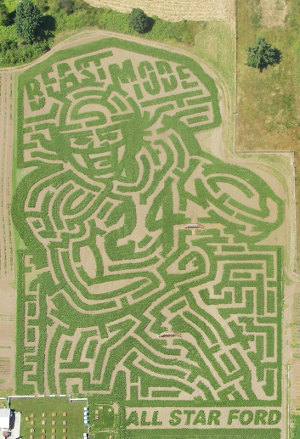