The following play is going to be looked at, and picked apart, this week, and probably for good reason. During the second quarter of Sunday's matchup between the Seattle Seahawks and Pittsburgh Steelers, Raheem Brock nearly obliterated Ben Roethlisberger's knee and lower leg. Brock was flagged on the play -- thanks to what's known as the Tom Brady rule -- and though he was hobbled, he eventually returned to the field.

The problem, of course, lies in what comes next. First, the video.

Take a closer look at what happened right before the hit. 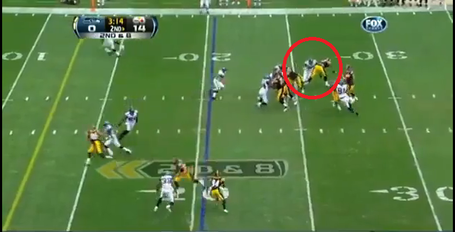 Props to Brock, who beat his man with a nice spin move on the play.

Brock could be facing a fine or suspension for the hit, but shouldn't be. This wasn't a player intentionally diving for the legs. Watching the play closely, it appeared more incidental than anything else, with Brock losing his balance while being helped along by a Pittsburgh offensive lineman who stuck his leg out. With that size, and his momentum, a collision with Roethlisberger's knee was inevitable.

Note that the Steelers' right tackle essentially trips Brock, sending him toppling over on the rush. While it was unfortunate the play ended with Roethlisberger on the ground, looking like his leg had snapped in half, Brock's actions were far from malicious.

In fact, I'm not even sure there should've been a flag on the play. And if Brock is fined or suspended for the incident, there should certainly be an uproar.