A run-down of the Seahawks base defensive scheme.

The Seahawks have some new names and faces and if you haven't been paying attention very closely, they run a pretty unique defense. It's known as the 4-3 Under, and though there are many variations of it, I wanted to break it down for you here in a succinct fashion.

Now, before I do this, a little caveat. One, the Hawks run many packages and schemes and this is just a general overview of their base personnel. They mix it up with blitzes, nickel packages, heavy packages, and everything in between. This is just meant as an introduction.

Here's how the base formation looks: 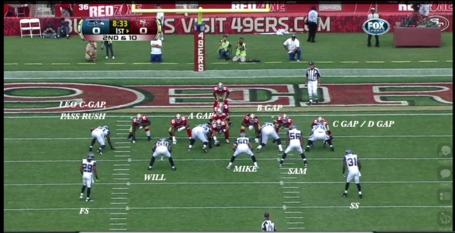 Let's start out on the Seahawks defensive line. On the left, you can see Chris Clemons in a three-point stance lined up wide off of the 49er's right tackle. In this defense, Clemons is known as the Leo and his main job is to rush the passer like a bat out of Hades. He also controls the gap to his side, also known as the C gap. So he has to fast, athletic, but also big enough to play the run if it comes to his side. Clemons is a very good defensive end for this role and last year racked up 11 sacks. While he was doing that, he was also very solid against the run, so he's a pretty key cog in the Seahawks system.

To his right, you see Brandon Mebane, the nose tackle, in a three-point stance as well. I've placed the words "A GAP" above him, and that's his primary concern. In some sets, he'll actually be responsible for more than one gap, but for the purpose of basic understanding, he will at time just be responsible for runs that go through the A gap.

Mebane needs to be very stout against the run but he also wants to push the pocket and force the quarterback to make quick (read "bad") decisions when the offense looks to pass. Mebane is probably the Seahawks best defensive linemen and his ability to stop the run and also push the pocket will be make or break for this defense.

To Mebane's right, with a big ole' "B GAP" above him, you find defensive tackle Alan Branch. Branch, in this example, is responsible for the B gap of the offensive line - to the left shoulder of the offensive guard. His main role is to put pressure on the quarterback in a passing situation by slicing through the B gap. He has to be very athletic and quick but also big enough to stop runs through his gap. Branch certainly has the size, at 6'6, 338 to stop the run and he has a lot of experience 'two gapping', or playing two gaps with the main purpose of plugging up the middle of the field.

Whether Branch has the speed and quickness to get after the quarterback is another question. He's shown an ability to be disruptive but the Seahawks line in this base package struggled with getting pressure on the QB in Week One at San Francisco. This will need to improve throughout the season.

To Alan Branch's right, we have Big Red Bryant, the strongside defensive end (the strongside is generally the side the offensive tight end is situated). Red, in this photo, is playing straight up with the tight end in front of him but sometimes you'll see him angled out a bit. Either way, in this base defense, Bryant 'two-gaps' and plays both the C gap and the D gap, mostly concerned with stopping runs to his side. Bryant has been very good in this role in the limited amount of games we've seen him play.

Now let's talk linebackers. Aaron Curry is playing the weakside linebacker in this base package, or WILL, and that's a departure from his normal strongside position (SAM). In the weakside role, Curry will have more opportunities to play in space, run in coverage, and flow to the ball and stop the run. I personally think he's well-equipped for this role. Curry's big, fast, and powerful. He'll clean up runs through the weakside B gap, and he'll run with running backs and tight ends that motion to his side. Keep your eye on Curry, he's in a make-or-break season and playing a new role. He could really have a breakout season, and he got off to a good start in Week One with 5 tackles and effective play.

The middle linebacker (MIKE) in this base scheme is David Hawthorne (K.J. Wright is actually pictured, but the starting MLB is Hawthorne). He's the quarterback of the defense and has to be versatile enough to play the run and drop back in pass coverage. He'll clean up runs through the A gap that Brandon Mebane and Alan Branch haven't handled. He'll drop back in zone coverage in the deep middle in some situations. He'll blitz in others.

The strongside linebacker here is Leroy Hill (SAM). Like Curry, he'll have to run in coverage with tight ends and running backs but his main role is to play off of Red Bryant and clean up anything that is out of Bryant's range. The outside D gap is the strongside linebacker's main concern but you'll see Hill blast through the line in the C gap as well. Hill has played well in that role so far as well, and again, it's a departure from his normal weakside spot.

In the defensive secondary you have free safety Earl Thomas, on the weakside, and Kam Chancellor, on the strong side. These positions are fairly interchangeable in this defense and both players need to be strong in run support, instinctual, rangy, and have ball skills. They are extremely important in this defense that is mainly designed to stop the run and are the last line of defense in pass defense.

Not pictured are the cornerbacks, and their roles are fairly cut and dry. They will play man against the receivers in some sets, play a zone in others, and blitz in others. They have to be strong in run support, good at jamming on the line and physical, but rangy enough to run in coverage. A very tough job. Brandon Browner, a new addition, has the physical attributes Pete Carroll covets at 6'4, 220, and has played very strong on the edge in run support. He still has a lot to prove in coverage.

Marcus Trufant has played well, and Walter Thurmond will get some reps in certain situations.

If this article has intrigued you, I've put together a whole series on the subject, and I hope you give it a look.

The 4-3 Under Defense, Part I: An Introduction - Field Gulls - The 4-3 Under, in it's simplest terms, is a gap control system meant to stop the run and to pressure the passer.

The 4-3 Under Defense: Coverage Schemes - Field Gulls - I want to give you just a basic look at some of the coverage schemes that you will see the Seahawks running. I'm not going to get into too much detail but I'll show you some of the basic tenets of each and explain what each player needs to do in each call.

The Seahawks' 4-3 Under Player Types: Cornerbacks - Field Gulls - There seems to be a very specific set of criteria the Hawks front office uses when selecting their cornerbacks, and it's one they've stuck to for the most part. I'll try and lay that out a little bit here and attempt to give you an idea of why they hold that belief.

Seahawks 4-3 Player Types: Linebackers - Field Gulls - I've broken down, the best that I can, the different player types in the Seahawks 4-3 Under defense run by Pete Carroll. We've looked at cornerbacks and safeties, after breaking down the assignments in general, and now I'm going to give you a quick and simple look at the linebacker position.

Seahawks 4-3 Defense: Press Coverage and The Jam - Field Gulls - The Hawks defense in 2011 will call for a lot of press-man coverage from the cornerbacks, and the jam is an important aspect of success. What does this mean for the Seahawks?

Seahawks 4-3 Defense: Scheme Versatility - Field Gulls - The Seahawks' gap assignments have always been a little muddled to me and I think that's because they probably purposefully change them from play to play, series to series, and situation to situation.