Looking at the Seahawks Week One matchup against the 49ers and applying some of the lessons learned to their game this Sunday against the Steelers.

Share All sharing options for: Seahawks Vs Steelers: Looking Back, Looking Forward

The Seahawks travel to Pittsburgh this Sunday to take on the Steelers in what is definitely going to be a very tough matchup. Both teams are coming off of losses and will be looking to get into the win column. I wanted to give my final notes and close the book on the Seahawks' loss to the 49ers but also relate the lessons learned from last week to this week's matchup with the Steelers.

What follows are some arbitrary thoughts and musings I gathered while rewatching the game.

Defense:
-- Brandon Mebane: Mebane got into the backfield on several occasions. He didn't get sacks, but he's collapsing the pocket, making Alex Smith move around. Exhibit A: 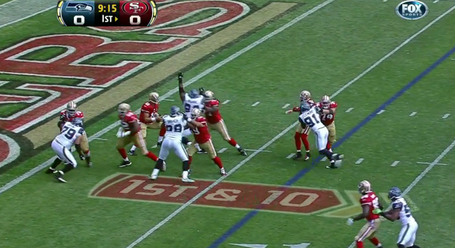 That's Mebane with his hand up, forcing Smith to run to his left on a third down, early in the 1st Quarter. A lot of fuss was made about the Seahawks lack of a pass rush and I think there is some validity to said fuss. That being said, there are some positives to be taken away, and Mebane's presence in the middle has been disruptive thus far.

The Hawks defensive line will need to pick it up against the Steelers because Pittsburgh's passing offense, led by Ben Roethlisberger is much more potent than that of the 49ers and Alex Smith. Alan Branch, Clinton McDonald, and Chris Clemons will look to get after Big Ben.

-- Aaron Curry: Curry is still running from the weakside linebacker spot a lot of the time and, by jove, he actually looks pretty comfortable there.

He seems relieved to be there again. He told Danny O'Neil, "I'm kind of like, 'It's about time. Me going back to my natural outside linebacker as I've always done, as I did in school. All I did is play outside linebacker. I played SAM in our base and WILL in the nickel, and that's where I feel comfortable. It asks me to maintain the same footwork, the same pad level, and it allows me to keep the same key, the same reads, the same responsibilities. I'm enjoying it."

His skillet and athleticism, and obviously his size and tackling ability, can really be utilized more there. Curry is best in run support but something to watch this week will be his ability to run with Pittsburgh's tight ends and receivers on his side.

Leroy Hill has been doing fine from the strongside, so I would bet this experiment continues. Read on.

-- LeRoy Hill: Hill has been playing well on the strong side. I noticed in the first quarter last week, on a 3rd and 3 situation, he took on a pulling guard and completely blew him up. Guard didn't know what hit him. Play went for a loss, and was on 3rd down. Sick. 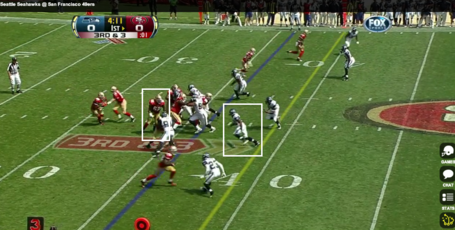 Here you can see the run develop. Leroy Hill sees Frank Gore, above, take the handoff and I've placed a box around OG Chilo Rachal, as he pulls from the left side of the line to lead block for Gore through a running lane. Hill sees Rachal bearing down on him and does with Hill does: dominates him. 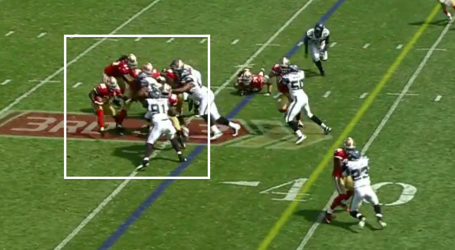 It's kind of tough to see, but if you look closely you can see that Hill has completely collapsed the running lane that Gore was about to go through. Hill, 6'1, 238 has smashed into Rachal and driven him back a few yards, thus neutralizing the run. Pretty impressive to watch in realtime. Rachal is not a small human being, and Hill gives up nearly 100 pounds to the 49ers guard, who measures in at 6'5, 323.

Hill will need to bring some of this nasty for the Hawks' run defense to hold back the Steelers excellent rushing attack.

-- Brandon Browner: You can talk all day long about Browner's coverage skills and whether he'll be flagged too much or be able to keep up with smaller, shiftier receivers, but he sure is a force on the outside in tackling and getting off blocks.

You essentially have an extra safety on the field at 6'4, 220 pounds and he's not an easy man to seal off or take out of the play. The corner's job is mainly to keep contain and force runs back inside but I've seen multiple plays in this game where he just sheds his blocker and makes the tackle himself.

A couple examples include a play on 3rd down where the 49ers swing the ball over to Braylon Edwards. Earl Thomas is on top of it but gets knocked on his ass when trying to make the tackle. Thomas did his part in slowing Edwards down enough and Browner comes over to mop up, swinging the Niners' receiver down to the ground hard. If you watched closely, Browner and Edwards were going at it pretty hard the whole game. Unfortunately that one PI call was made in the endzone, but otherwise I'd say Browner really held his own.

Again, late 2nd quarter, the 49ers attempt a sweep to Browner's side and he comes up and makes the stop on Frank Gore to force a key third down situation. Not to pile on Kelly Jennings here, but I just don't see Jennings coming up with a big stop on the corner with Frank Gore barreling down on him. I like this a lot about Browner.

This is what Browner brings to the defense. He's got that nasty about him too that sort of sets the tone for the Seahawks defense. I'll be looking for Browner this weekend against Pittsburgh.

The Pittsburgh receivers are more known for speed than for being tall and physical. Their tallest receiver is 6'1 so at 6'4, Browner should have a big height advantage. I wouldn't be surprised to see Walter Thurmond get a lot of snaps this weekend because he's in that faster, quicker mold as a corner and might match up better against the Steelers Antonio Brown, Emmanuel Sanders, and Mike Wallace. We'll see.

-- Kam Chancellor: The guy has a nose for the football. Had two tackles for a loss but also had some tackles just at the line of scrimmage or a few yards downfield. Seems to have a good sense of where to be. Now, pretty tough to tell watching this tape, but he looked good. Hits hard, plays the intimidator role.

-- Earl Thomas: Someone mentioned this somewhere and I feel like they're right -- Earl looks significantly beefier this season. Which is good, because he absolutely lays hat on people. Had a couple of tackles for a loss on running backs as well. I feel like tackles for loss should be higher profile statistic, kind of like sacks, but you don't hear a lot about it. Either way - ET made some nice plays behind the line, and lived up to his rep as a guy that's always around the ball.

Earl Thomas and Kam Chancellor will be key for the Seahawks when they take on the Steelers this weekend. If they can slow down Big Ben's passing game, and the run defense can remain stout, the Seahawks could surprise some people.

-- You ever hear the term "It's a game of inches?". Well that was true in last week's game against the 49ers. There were two plays in particular that the Seahawks were merely inches away from making.

The first was in the third quarter on a play where Brandon Mebane pushed the pile, forced Alex Smith to his right on a roll out. Smith hucked it downfield to Josh Morgan and the pass went just over the fingertips of both Aaron Curry and Earl Thomas for a completion. That was on a third down, and kept the drive alive.

The second was in the early fourth quarter, Another third down situation where Smith completed a pass to Braylon Edwards and the ball went just past the fingertips of a stretched out Marcus Trufant. Trufant made a good play on the ball but JUST missed batting down the pass. Would have killed the drive and given the Seahawks decent field position. Nope. Game of inches.

Sometimes you win that game of inches, sometimes you lose it. For the Hawks to come in to Pittsburgh as 12 point 'dogs and get the win, they're going to have to win that game. And get a few lucky bounces.

On the offensive side:

-- Mike Williams: will need to be a bigger factor. I talked about it here, but Tarvaris needs to target him more. He'll need to make some tight, timed throws if he wants to be successful. I understand the 'limit turnovers' idea that Pete Carroll has espoused, but he's hesitating too much. Williams made some very difficult catches though against the 49ers, and it's what he's there for. Throw it to him. Just throw it near him, he'll go get it.

-- Doug Baldwin: TD catch was the only easy thing he caught all day. Had a diving catch for a first down early in the game, then another leaping grab for a first down in the second half. This guy is the new Brandon Stokley -- Tarvaris' safety net. Look for him to be all over the place on Sunday if the Hawks have a prayer of beating the Steelers.

-- Zach Miller: quietly had a good day. He didn't make a lot of mistakes, and played all over the field. He lined up on the left wing in the first quarter and caught a quick slant. Ran out of the backfield after Michael Robinson went down. Played solidly, just as you'd expect. Hopefully he'll get more involved in the passing attack this week.

-- Marshawn Lynch was pretty quiet until the 2nd half. Not coincidentally, this was when the Seahawks passing offense started clicking and the 49ers weren't stacking the box with, like, nine players. He had a pretty sick little stiff-arm on a 49ers linebacker on a 12 yard run early in the 3rd quarter.

If the Hawks rush offense can get clicking it will make life so much easier for Tarvaris Jackson, especially against the Steelers. The intel that I have is that the Steelers will try to take the Seahawks' rushing attack completely out of the game and force Tarvaris Jackson to beat them with his arm. I suppose that's what I'd do too.

-- Ben Obomanu: Obomanu is quietly (arguably) the Seahawks best open field runner on our receiving corps. Golden Tate should be this guy, but hasn't really shown that yet. Obo has had the best success on end-arounds, that I can remember, and is smooth after the catch.

He did miss a fade pass in the endzone in the 3rd Quarter though. The pass went through his hands and hit him in the chest. He was being blanketed pretty well by the defender but really could have caught it. Good pass by Tarvaris though.

Obomanu runs crisp routes and is always where he needs to be. He can get separation because he's got that wiggle and quickness to him that Mike Williams and Sidney Rice don't have. Look for him to get targeted a lot by Tarvaris Jackson.

Jon Ryan: He seems to be a pretty good punter. 77 yarder (net 57) in the 3rd quarter. That's pretty deece. My guess is that he'll get a lot of action on Sunday. Let's hope he helps the Seahawks win the field position game.