The city of Seattle is one of the most progressive in the country, so it would make sense that they'd go big on alternative energy projects. Now they're using that energy to power the house of their beloved football team. Jeff Barker of the National Geographic has more on the story.

The 3750 solar panels are made from thin-film photovoltaic material designed to capture sunlight in multiple ways. The panels will cover 2.5 acres and generate over 830,000 kWh of electricity. While Solyndra is in trouble because of a little known problem called bankruptcy. So even though Seattle isn't the most ambient of cities, the project will not require direct sunlight, but can also capture energy via reflected and diffused sunlight as well.

Considering how big an energy drain a football stadium can have on a city's power grid, any steps the Seahawks and other teams (like the Redskins and Eagles) towards reducing that load has to be viewed as a positive step.

After the jump, you can take a look at this green energy project from an overhead photo of the stadium and the solar panels. 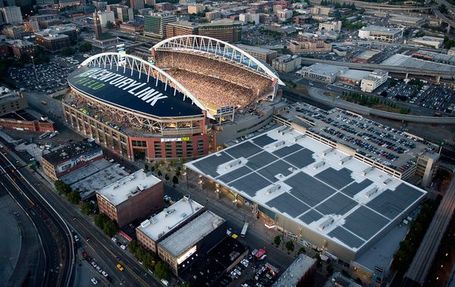 (Image from Rod Mar of the Seattle Seahawks)

For more on the Seahawks, head over to Field Gulls!