Seahawks Vs. 49ers: The "What's Your Deal Bowl" Is About To Go Down

Share All sharing options for: Seahawks Vs. 49ers: The "What's Your Deal Bowl" Is About To Go Down

In case you've been living under a rock for the last week or two and have had no access to this mythical and mysterious thing called the "internet" (it's a chemical reaction similar to fire, I think?), I'll get you up to speed. Pete Carroll and Jim Harbaugh used to coach college football while concurrently at schools in the Pac-10. They are now concurrently coaching professional football teams in the NFL's NFC West.

Back in 2009, Carroll's USC Trojans met up with Harbaugh's strangely singular Cardinal to play a little match on the gridiron. The Stanford Maroonish Color defeated the Trojans 55-21 and came to that final score after attempting and converting a 2-point conversion very late in the game despite being up by many touchdowns (dicks).

Well, Old Blondie (as I like to call Pete) didn't really appreciate this gesture and when the two met at mid-field to shake hands, Pete asked him "What's your deal?"

Obviously possessing a rapier's wit, Harbaugh's witty and clever retort was "What's YOUR deal?" (He'd recently finished seasons one and two of MTV's Yo Momma on Netflix instant streaming so he had some good comebacks in his repertoire).

That's pretty much all that happened. Now, they meet again. They've both played it off in their own ways -- Pete basically denying it happened despite video evidence that would be admissible in court,--  and Jim just saying that it doesn't matter and he respects Pete as a coach (real mature Jim, reaaaaal mature).

Let's be honest. Who cares? It was two years ago.

Well, us media folk just can't let things like this die, and it's fun to name things the "What's Your Deal Bowl" to blow things way out of proportion. It's obvious to all of us that Pete Carroll is going to get a big lead and then really stick it to Jim by going for two late in the game. Then, he's gonna wave at Jim and do this: 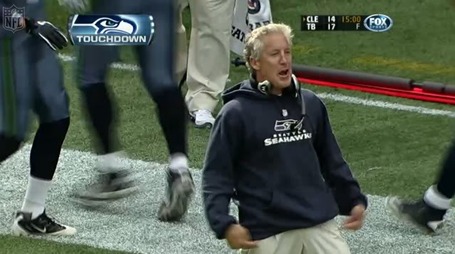