Wikipedia is the source for accurate, relevant information on just about anything, right? I mean, there's no way a page could ever be defaced or turned into some kind of joke. It's simply impossible, especially when anyone can edit pages and all editing work is, essentially, done on the honors system. So that must mean the Seattle Seahawks are now under new ownership and have a new head coach!

Th Seahawks Wikipedia page, screen-capped below the jump, took on a fun look Wednesday. I have no idea how long it's been like this, but I can only assume a different Allen now runs the show, a promoter with awesome hair is the head coach and Weezy F. Baby is making personnel decisions. 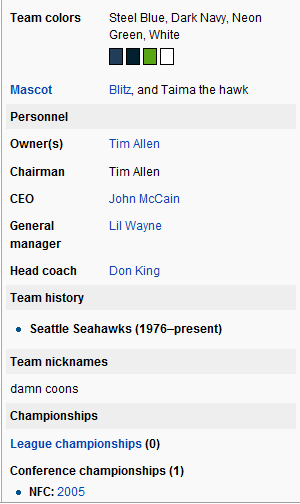 The team nickname is certainly uncalled for, but the rest of information is interesting. Lil Wayne as general manager, John McCain as CEO, Tim Allen as owner and chairman, and Don King as head coach is a pretty sweet lineup. This is the Dream Team, Philly.

Personally, I cannot wait until the Seahawks sign all of the Cash Money Millionaires during free agency this year. With Lil Wayne calling the shots, this team is going to be so hood! Gatorade on the sidelines? Scrap it, we're going with purple drank.