The Seahawks Starting Quarterback Decision: The Tribe Has Spoken

Share All sharing options for: The Seahawks Starting Quarterback Decision: The Tribe Has Spoken

The Seahawks are mired in a 'quarterback controversy' at the moment, if you can call it that, and some local residents decided to let their voices be heard. This sign was spotted on 15th Ave NW, down in Ballard, and the author eloquently, succinctly, and persuasively made his or her argument. 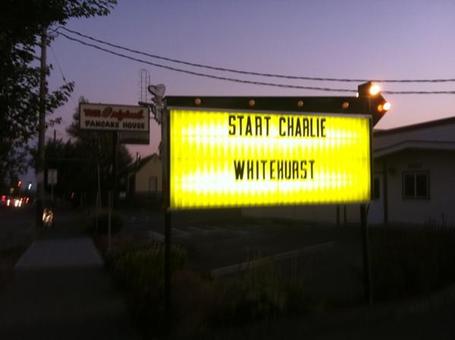 It certainly goes to show how much Seahawks fans really care. Promotion of your business, livelihood and ability to feed your children? Naw. I want everyone to know who should start at Quarterback, and it's not that bum Tarvaris Jackson! I'm sure we'll see more of this type of thing throughout the preseason and into the regular season as the Seahawks young and inexperienced line gel together and learn how to play as a unit  -- and thus give Jackson time to throw.

Tarvaris has been running for his life most of the time, but really hasn't helped himself by stepping up into the pocket when its there, and by throwing with decisiveness. Charlie Whitehurst, on the other hand, has.

He has done well against second stringers and while running a very different offense than Jackson has been asked to do. It is encouraging for Charlie, in my opinion, and something that you like to see. But it doesn't mean he could do better under the circumstances that Jackson has faced. My vote would be to give Jackson some time to get it together and we'll revisit this discussion in Week Four or so.