Seahawks Vs. Chargers: Russell Okung's Ankle, Josh Portis' Emergence And What We Learned

Share All sharing options for: Seahawks Vs. Chargers: Russell Okung's Ankle, Josh Portis' Emergence And What We Learned

The NFL preseason is underway at long last, and the Seattle Seahawks are winners. On Thursday night in San Diego, the Seahawks bounced back from a 10-0 deficit to down the Chargers -- thanks to a flurry of late scoring -- and win their first exhibition game of the season, 24-17. The score is almost insignificant; this is preseason, after all. But we can take a few things away from the matchup, and there were a few youngsters that stood out.

As the first game of the Seahawks preseason slate approached, all eyes were on the quarterbacks, and rightfully so. Seattle fans wanted to see, with their own eyes, how Tarvaris Jackson looked, whether Charlie Whitehurst could challenge for the starting job and who this third-string quarterback named Josh Portis was.

Jackson started, as expected, but it's hard to make any judgments about his limited performance with less-than-full-strength personnel around him. After all, this was a game in which five major contributors at wide receiver -- Mike Williams, Sidney Rice, Ben Obomanu, Deon Butler and Kris Durham -- all sat on the sidelines. But he is mobile, and showed his ability to scramble, which may come in handy quite a bit this season.

Whitehurst was like an amateur golfer who uses the front-nine as a warmup before finding a groove on the back. He started slow -- as did the entire Seahawks team in the first half -- but came out firing in the third quarter, leading two touchdown drives. Whitehurst has been borderline terrible in training camp practices, but perhaps he can build off Thursday's game. If he doesn't, he'll likely be pushed by an unheralded rookie with loads of potential.

The real story at quarterback -- for me, at least -- was Portis, the undrafted free agent who bounced around before ending up at a California University of Pennsylvania. He's raw, but the potential is certainly there and it showed. Given the opportunity in the second half, Portis shine, making plays with his feet and with his arm. He was a solid 5-for-9, throwing for 69 yards and a touchdown.

Again, the quarterbacks were throwing to a patchwork unit of receivers, many of which will be buried on the depth chart when real games approach. But Stanford product Doug Baldwin handled himself well and boosted his case with a solid performance against the Chargers. His four catches for 29 yards each topped the receiving corps -- tight end Dominique Byrd (two catches, 52 yards) led all Seattle players in yards.

Special teams fell somewhere between awful and atrocious, especially on kickoffs. With the new kickoff rules in place, it should be easy to simply boot the ball out of the back of the end zone, let the opponent begin on its own 20-yard-line and not worry about the coverage aspect. But not so for the Seahawks.

After a torrent of complaints about the new rules significantly decreasing the number of returns, the Seahawks reminded fans that kicks can still be taken to the house. Brandon Coutu struggled to get the ball deep enough into the endzone to force a touchback, finally resulting in a monster return during the second half. Bryan Walters took a kick 103 yards to the house, and the Seahawks were the victims of the first kick return for a touchdown under the new rules. It wasn't pretty.

The Seahawks defensive backfield was also an adventure at times, but promising at others. Kelly Jennings is still Kelly Jennings and that's probably not going to change, but the youngsters are bursting with potential. Having big, physical cornerbacks seems to be the direction head coach Pete Carroll is trending towards, and the young defensive backs fit the bill. Brandon Browner handled himself quite well, and just having that physical presence on the outside made a difference.

Russell Okung lasted all of four plays before hobbling off the field and, eventually, heading to the locker room on a cart. I'm not sure whether it's good or bad news that he wasn't touched on the play he came up limping, but I'm leaning toward the latter. It's no longer a freak accident when he goes down after hearing a pop during a seemingly routine play, and it's not good at all.

The takeaway from Thursday's game? We need something to protect our fragile left tackle. Something like this: 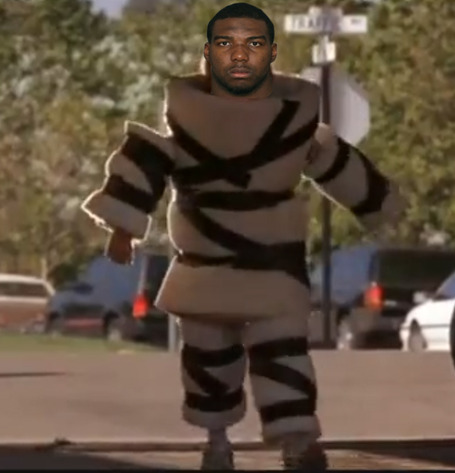 Courtesy of the amazingly talented Mark Sandritter at CougCenter.

Remember: this is the preseason and making sweeping judgments about the game -- especially the first -- isn't good for anyone's health. It was great to see the Seahawks back on the field and fun to see some of the new faces, but it's just one meaningless game.

Even still, the best part of Thursday night was simply that it was football. After a long layoff and a tiring lockout, football was back. The sights, sounds and emotion that comes with a game -- any game; even a preseason one -- was refreshing. It was fun to sit back and enjoy the sport again, and the Seahawks did their part by providing a thrilling conclusion. I found myself not caring at the start, then sitting on the edge of my seat before completely jumping out of the chair when Jerrod Johnson deflected Scott Tolzien's fourth-down pass to seal the win. Football is back and it's a great time of year.

For even more on the game, head over to our Seahawks vs. Chargers StoryStream or visit SB Nation's Field Gulls.