Matt Hasselbeck said his goodbyes to Seattle Seahawks fans last week, changing his Twitter avatar to a photo of him waving goodbye shortly after the news of the Seahawks' decision to not re-sign him broke. It was a classy move and you'd expect the Seahawks to do the same in an effort to thank him for his years of service. On Sunday, the Seahawks did just that, taking out a full-page ad in the Seattle Times as a goodbye to the franchise quarterback that saw so much success in Seattle.

The ad is a thank you and reads, "We appreciate all the contributions you, Sarah, Annabelle, Mallory and Henry have made to our community, both on and off the field." 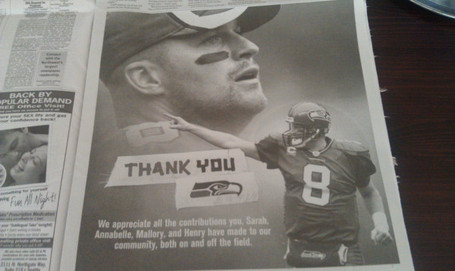 While many fans felt scorned by the decision to allow Hasselbeck to leave, it was handled with class all-around. John Schneider called Hasselbeck to inform him of the Seahawks' decision to go in another direction, at least giving him the courtesy of a phone call. Hasselbeck was gracious as always, quietly moving on while giving thanks in a subtle way.

Edit: Doug Pacey, of the Tacoma News Tribune, informed me the ad ran in Sunday's TNT, as well. It sounds like the Seahawks took out full-page ads in the major Seattle- and Tacoma-area newspapers as one last goodbye to Hasselbeck. Again, classy moves all around.

For more on Hasselbeck's departure and all your Seahawks news needs, head over to Field Gulls.