The Seattle Seahawks needed bodies in training camp to fill out their roster, and Pete Carroll knew just the guy to call. With a small window to sign free agents before camp began, Carroll was going to have to get creative, finding replacement players to fill needs before free agents could begin practicing on Aug. 4. So Carroll placed a call to an old friend: Rob Riggle.

Riggle and Carroll have been going back-and-forth on Twitter all day, with the comedian begging for a job with the Seahawks and trying to convince Carroll he was ready for a chance to shine. Carroll appears to have finally relented and allowed Riggle to don a helmet and uniform to take the field in Renton. 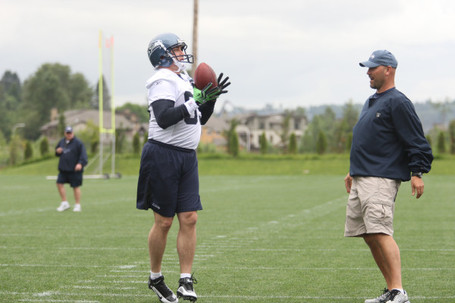 Via Pete Carroll who adds, "I've seen better hands on a clock... And did they arrest the guy who stole your calves?"

There are so many amazing things going on in this picture to count. It's taken just one day for Pete Carroll to lighten the mood at training camp, but would you expect any less? All that's left is to sign Riggle and toss him on the offensive line for a preseason game.