We know this year's free agency period is hectic and confusing, thanks to the fast-paced nature of it all. Rumors are swirling like a tornado and reports of free agent signings have been wrong more than once. Everyone has been affected at this point, including the major networks. It's no excuse for erroneous reporting, but the 2011 NFL free agency period is a unique experience that may never happen again.

And for some Seattle Seahawks fans, this latest mistake -- which is more of a graphics fail -- may have caused a momentary heart attack. The NFL Network thought Matt Hasselbeck and Sidney Rice signed with the Seahawks on Wednesday. 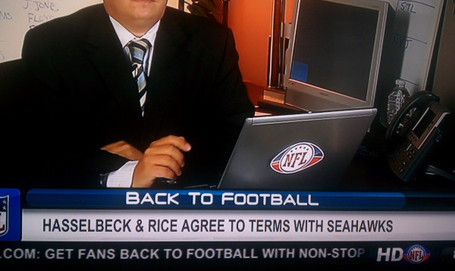 Via Doug Farrar. If you'd ask me which of those two was more likely to sign with Seattle before this week, I'd probably say Hasselbeck. As it turns out, Rice was actually the big target for the Seahawks! Hasselbeck, on the other hand, will reportedly sign with the Tennessee Titans to serve as a stop-gap at quarterback and mentor to former Washington Husky Jake Locker. Funny how that all works out.

For the latest on free agency, including players to watch and Seahawks transactions, stay with this StoryStream. For full coverage of the Seahawks free agency moves, head over to Field Gulls.