Share All sharing options for: NFL Lockout Ends With A Handshake Between Roger Goodell, DeMaurice Smith

The NFL lockout is over and professional football is back just in time for the start of training camp. After months of laborious negotiations, the owners and players were finally able to form a consensus and come to an agreement on a new collective bargaining agreement. With billions of dollars hanging in the balance, negotiations turned into a high-stakes game of chicken, with NFL commissioner Roger Goodell and NFLPA executive director DeMaurice Smith battling back-and-forth before finally coming together to hammer out a deal and convince their constituencies it was fair.

As the lockout ended, Smith and Goodell met with the media in a joint press conference to announce their triumph. The news was met with jubilation from NFL fans as our long national nightmare was over.

The following photo captures the moment perfectly as Smith and Goodell shake hands to signal the end of the lockout while standing in front of a photo of Gene Upshaw. 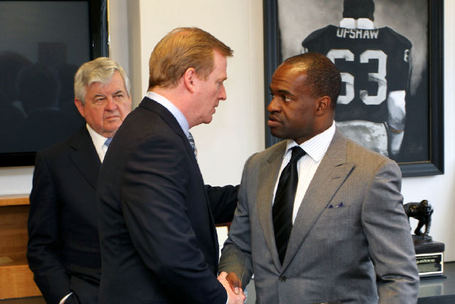 And with that, it ended ... finally. Now, back to our regularly scheduled football programming.