OK look. We all thought that the lockout would be over by now. Or, we all hoped it would be anyway, but it isn't (as of 5 pm on Sunday night). Because of that, I don't have much to tell you in real, actual news. So, instead, I decided I would make a list of my top-5 favorite Seahawks, in no particular order. Here they are, and here's why I like them.

-Punter Jon Ryan. How can you not like this guy? Right off the bat, he isn't fat. I don't know why, but fat punters really get on my nerves. They have to wear those tight-ass pants with no pads so not a lot gets left to the imagination. In the age of HD, it's even worse. So, as I said, right off the bat my hat's off to the guy for not being the stereotypical chubby, unathletic wheenie punter (sorry if you're that guy, but come on man, you're supposed to be a 'professional athlete').

Second, as Jim Moore put it in a great column about the Seahawks' punter last season, "Though I'm basing this impression on a couple of short conversations I've had with him, Ryan appears to be the kind of guy you'd like to shoot the breeze with over a couple of beers."

I concur. I'm not sure if this is because he's Canadian (because Canadians are laid-back), but he seems like a regular dude that's just happy to be where he is, and I appreciate that. He'll chat with you on Twitter if you hit him up, and he's got a good sense of humor.  He is growing his ginger lettuce out to donate to Locks of Love. He is a pretty good punter too - and will be looking to improve in 2011.

-Marshawn Lynch. This one is a layup. He's beastmode. He created the beastquake. He's got that Gary Payton-esque vintage Oakland patois that just makes you love the guy. (I actually think he sounds a LOT like rapper Too $hort, but that's neither here nor there). He runs like a wild banshee and has a big, fun personality. I haven't heard one negative thing, off-field wise, on him since he got to Seattle and by all accounts he's a great teammate. He was a groomsman in backfield partner and former Cal teammate Justin Forsett's wedding.

When I picture Lynch I picture Pete Carroll giving him a hug after he ran through 8 defenders on his way to a 67-yard touchdown against the defending world champion Saints. Glad to have him in Seattle.

-Big Mike Williams. Another layup. He's humble, well-spoken, funny, and most of all, talented. He had a good year for the Seahawks, started making his way back into the league, and could be a receiving stalwart for the Hawks for years.

After leading the Seahawks in receiving after sitting on his couch for two years, he publicly stated he didn't expect a big contract or big money, and accepted a modest but respectable 3 year offer from the Seahawks. This time around, after busting out in Detroit and Oakland, he's determined to earn his keep.

He busts teammates' chops, gives compelling and interesting interviews. He's self-depricating and honest. He's a good teammate, from what I understand, and has been working hard this offseason to bring it in '11.

-Paul McQuistan. I'm not even sure this guy will make the team this year. He was brought on post-season by the Seahawks, and will compete to play on the offensive line. I don't know much about him, but a guy that cuts his hair like THIS is ok in my book. 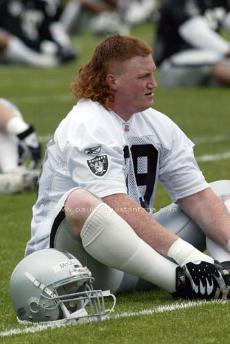 I'm assuming he's 'being funny' but even if he's not, I like him, because it takes a certain kind of person to rock a mullet in this millennium.

-Brandon Mebane: Look I'll be honest - I'm not really a huge Brandon Mebane fan. I'm not saying that I don't like him, not at all. I'm more just kind of like, "yeah - he seems cool." I think he's as John Schneider described him, "a steady pro.' I don't know a lot about him, personally, and haven't read or seen many interviews with him. He does a solid job for the Seahawks and hopefully they'll resign him for 2011. (He's a free-agent at the moment). All I know is that he randomly chest bumped Derek Anderson after a play in which he wasn't really involved and will forever hold a soft spot in my heart because of it.

Watch. The play ends, he sort of lingers, looking around, then just when no one, especially poor Derek Anderson, expects it, he unleashes the "Bump Heard Round the World." I'm kidding, it wasn't called that. I made that up to make it seem like a big deal. I thought it was pretty funny though.

Oh, and if you like gifs, here is the gif of it.