Share All sharing options for: ANIMATED: Pia Sundhage Plays Air Guitar, May Be Separated At Birth From Pete Carroll

If you've been watching the 2011 Women's World Cup, you know who Pia Sundhage is. The lively US Women's National Team head coach has been a star, captivating crowds with her carefree attitude and affinity for singing. On Sunday, Sundhage is staying loose ahead of the Women's World Cup Finals, looking to project that relaxed attitude on her team as it prepares to face Japan.

How relaxed is Sundhage? This is her, on the field in Germany, playing the air guitar.

The gif comes from Ben Golliver, formerly of SB Nation Seattle and currently of Blazers Edge and CBS Sports. And Golliver brought up another point I hadn't realized, leaving me wondering if she may be related to Seahawks head coach Pete Carroll. 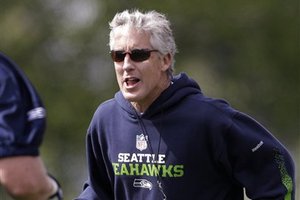 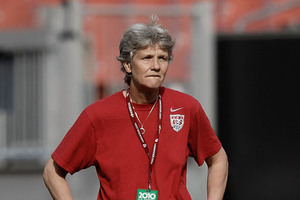 Think about it. The energy, the hair, the aloof style. They have the same personality, similar looks and may, in fact, be separated at birth. Either that or the two are sharing coaching notes and have decided to adopt the same styles.

The animated image above might as well be Carroll. Couldn't you see him on the field before a Super Bowl, dancing along the 50-yard-line while playing an air guitar? Couldn't you see him singing at a press conference, breaking up the monotony of a normal question and answer session?

I thought so. Sundhage and Carroll might as well be twins.