The 2011 ESPY awards are Wednesday night and a few of our own Seattle Seahawks will be in attendance. We know this not because an ESPY is an all-important award, but rather because Matt Hasselbeck is tweeting about it. Hasselbeck loves his Twitter account and seems to enjoy sending pictures to the world, giving the fans clues about what he's doing.

But if you need a photo to sum up what the ESPYs are all about, Hasselbeck's picture on Twitter does the job. After the jump a shot of where Hasselbeck, Leon Washington and Marshawn Lynch will be sitting. Please direct your attention to the bottom-left corner of the photo. 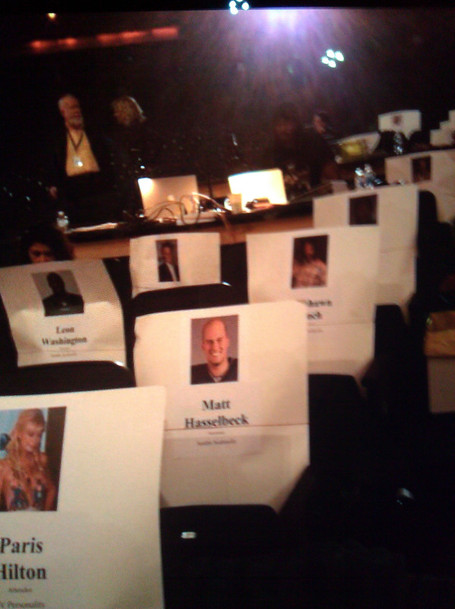 That's Paris Hilton, seated right in front of Hasselbeck, in perfect wet-willy range. It also describes the nature of the award show. What Paris Hilton has to do with sports is anyone's guess -- we know you're thinking it, don't say it -- but she'll be in attendance.

And what I wouldn't give to see Hasselbeck or, better yet, Lynch flick her in the ear throughout the show, just for fun.

In all seriousness, the ESPYs are for an excellent cause: The Jimmy V Foundation for Cancer Research. It was at the ESPYs that Jim Valvano made this memorable speech, probably one of the best I've ever heard. It's a speech that's lived on as a symbol of hope in the almost two decades since.