It started innocently enough with a picture of Seattle Seahawks head coach Pete Carroll's office. It's a normal office for an NFL coach, with papers strewn about and flat-screen TVs for watching film or his favorite re-runs of the Brady Bunch. But in the corner of the photo sits an intriguing piece of headwear: A silver Seahawks helmet. 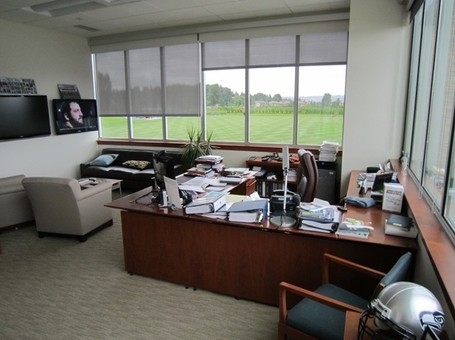 Via Rob Staton and Field Gulls

It's subtle, but this isn't simply an old helmet. As noted on the photo page, the helmet resembles the Seahawks uniforms of old, but also has the new logo plastered on the side. So are the Seahawks planning to don the throwbacks whenever the NFL lockout ends?

As Rob Stanton noted on Twitter, Carroll is overseeing the redesign and we know he loves a return to traditional apparel.

Team has discussed potential changes w/Nike and Carroll was said to be involved. He had major input in return to traditional USC uniforms.

It could be much ado about nothing, but I, for one, would love to see a return of the grays and retros.